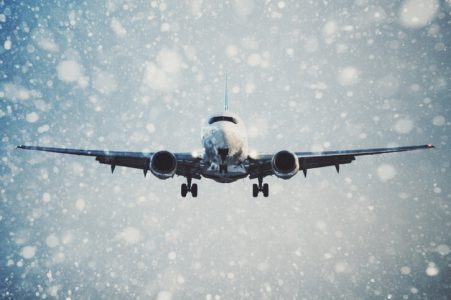 Did you see the video recently showing the airline skidding off the icy runway at O’Hare? It’s that time of year again…aviation weather is about to wreak havoc with our runways. If it can happen at O’Hare, with the best snow removal equipment and operators, it can happen anywhere.

Airline Skidding off the Runway

The best case scenario is landing at a big airport with a tower and long runways with constant snow removal, (which by the way, describes O’Hare, where the video incident took place). The worst case scenario is landing at a small, uncontrolled airport with a narrow, short runway that may or may not be oriented into the wind. Unless someone is on the ground at that airport and is willing to drive the runway to give you a braking report, you have absolutely no idea what is underneath the freshly fallen snow.

The worst time to discover a “nil” braking action is when you’ve just touched down on a relatively short runway. Some extra preflight planning steps may be required in such a case to prevent an incident, or even a full blown disaster. For example, I was a Mercy Flight pilot who often flew to remote, uncontrolled airports in the North Country of New York and New England – believe me when I say that winter flying was extremely challenging. If I knew that it had been snowing at my destination, I would often call the local sheriff department to ask for a braking action report before I accepted the flight (if the airport manager was unavailable and the “FBO” was closed for the day). Flying a low pass over the runway was a waste of time, since the runway was simply white, with no indication of the depth of the snow or the condition of the runway underneath the snow.

If you decide the runway is safe to land on, you will still want to aim for as close to the end of the runway as you safely can and try to be exactly on your ref speed when you touch down. The only exception would be if you had airframe icing and a faster approach speed was required by the POH, in which case you may want to reconsider landing distance calculations.

If you have any doubt, divert to a larger airport with a longer runway, and get a current braking action report before you fly the approach. As you can see by the video, this still does not guarantee a safe outcome, but you will at least know what you’re dealing with.

If the aviation weather is still making you second guess yourself, your best option may be to simply turn down the flight and wait until the weather improves and the plows have a chance to clear the runway. You won’t be sorry.