New GPS Navigation App Can Assist With Ditching Near Ships 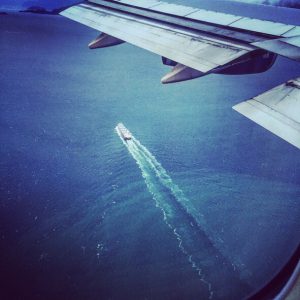 My boss has been wanting to take the jet to Hawaii for quite some time now but I must admit, I’m a little nervous. Don’t get me wrong, I would absolutely love to go on an all-expense-paid trip to paradise, but that’s a lot of water to fly over. Fortunately, a new app that can be used to locate the position of seagoing ships has just been released and I feel better about ocean flying already!

Aeronautical Data Systems (ADS) introduced the new ERGO Blue app for the iPad and its sole purpose is to help pilots identify the position of ships as an emergency aid for overseas flights. This app could mean the difference between a total disaster and an accident with survivors. Being able to navigate a stricken airplane to an area in the vicinity of ships would be quite the lifesaver.

To use the app, the pilot simply enters two airport identifiers, such as the departure and arrival airports, and then selects the “vessels” button. ERGO Blue then displays the position of any ships near that route. Alternatively, the user could enter two “diversion” airports, one near the outbound coast and one near the inbound coast and still select the vessels button.

If the pilot has airborne internet access, the app displays real-time updates of ship positions and their tracks. If no airborne internet is available, ERGO Blue still has the capability of identifying nearby ships, but their position and tracks are predicted, not actual. The ship information includes the vessel name, the time, lat/long position, track, speed and distance from the aircraft.

ADS plans to add fixed and mobile offshore drilling rigs to the current database of over 220,000 ships later this year. The price for the app is $49 per week, $89 per month, or $997 per year. If a pilot only needs the app for an occasional over-ocean flight, the weekly rate is the minimum subscription length, which I would gladly pay out of my own pocket for the peace of mind.

And it gets even better – ADS has completed testing for a VHF voice and data connection directly to nearby ships under an experimental FCC license. Once this capability is fully approved, they will be able to offer the additional benefit of the app automatically contacting nearby ships via a portable radio connected to the pilot’s iPad. All ships within VHF range (potentially 250 NM) will receive the message with the aircraft’s updated position every 2.5 minutes.

Where do I sign up? I’m ready to call the boss and tell him to start packing! The technology of GPS navigation keeps getting better and better and the potential for future advances is mind blowing. I’m sure this app will only be used in the rarest of cases, but just knowing it is available will make me sleep better at night!