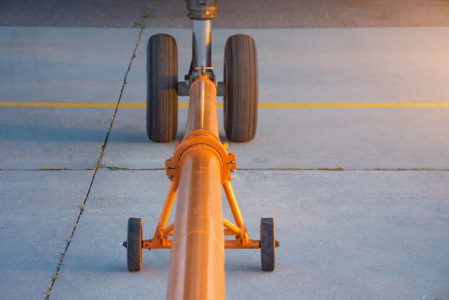 It never hurts to go over some basic aircraft and pilot training procedures, in this case regarding the proper way to pushback. A recent incident report concluded that inadvertent crew braking during taxi pushback likely led to the collapse of the nose landing gear on a 2000 Learjet 45 at Scotland’s Edinburgh Airport. This was the fourth known similar incident, all involving Lear 45’s.

There were no reported injuries on any of the four mishaps, but aircraft damage was significant. During the most recent incident in Scotland, both engines were started and the aircraft was pushed back using a TLD 150 Max tug. As the Lear was being turned to line up on the taxiway, the nosegear suddenly collapsed and the aircraft came to rest with the nose on the ground.

During the pushback, the copilot had been adjusting his rudder pedals. While bringing the pedals aft, he says there was a possibility that he might have tapped the toe brakes by mistake. When the aircraft was examined after the incident, it was determined that the nose leg bracket connected to the gear actuator had failed, allowing the gear to collapse aft.

The bracket was examined at a metallurgical lab and they ruled that it had failed due to overload. There was no evidence of fatigue or material defects, but photographs of the damage looked similar to photographs of another incident involving another Lear 45 at its production facility. That collapse also occurred during a pushback with brake application.

The company said that it was aware of two other events in which brake application during pushback resulted in the same rearward nose landing gear collapse. Until Learjet comes up with a mechanical fix for this problem, I would think that the best way to prevent further incidents is to include a thorough briefing for all pilots going through Learjet pilot training.

All feet should be flat on the floor during any pushback activity. Actually, that’s good advice for any aircraft pushing back. Feet on the floor!