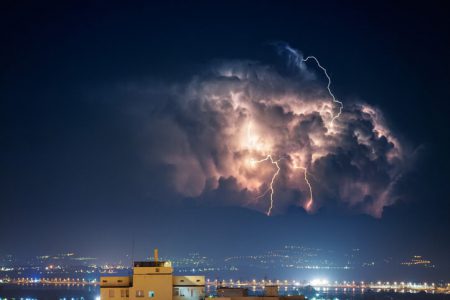 I felt like Brittany Spears singing “Whoops, I did it again”…. Mother nature was about to challenge us to a race, like she has many times before. A race between us and aviation weather, a position I hate to be in, but if you fly for a living, it’s going to happen.

I had just received “the call” from the boss saying that he was on his way back to the airport and would be ready for departure in about 15 minutes. A quick look skyward and we knew it didn’t look good. A line of storms was about 15 minutes from the airport boundary and it was going to be close.

To make matters worse, the leading edge of the storm was just the beginning of a larger system that looked like it would be raining over the airport for hours. Did I mention that we were on our way home? Against everything I knew about being a smart pilot, we decided to give it a shot and see if we could beat the storm. WHY do intelligent pilots keep doing that? Probably because we keep getting away with it. And honestly, we were just going to take a look. If it didn’t look good, we would park it and let the storms pass.

I had the engines started as the boss was race walking across the ramp and we were moving as my partner closed the door. The first drops of rain were falling as we got to the departure runway. We had a clear path to safety if we could make an immediate right turn once airborne, so we pushed the power levers up and away we went.

As we accelerated toward V1, we could see the wall of water marching down the runway….I vowed NEVER AGAIN WOULD I PUT MYSELF IN THIS SITUATION. It is not worth it. I know about microbursts and downdrafts and windshear and rain bombs, but here I was. Whoops, I did it again. We rotated just before the water wall and made an immediate right turn. Once again we lived to tell the story. But it could just as easily gone the other way. We missed the gust front by seconds. Just plain stupid.

With everything we know about dangerous aviation weather, with all the tools we have to avoid it, we still tempt fate. As an example, a Boeing ended up in a river in Jacksonville recently while attempting a landing in a thunderstorm. Sometimes we win and sometimes we lose. It’s best not to play.