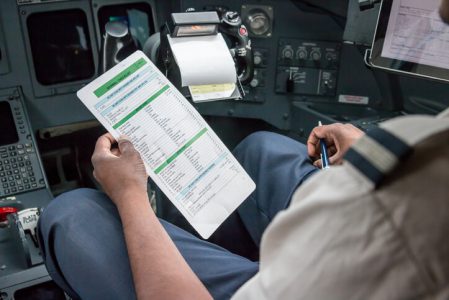 “BFAT” When it Comes to Single Pilot Resource Management

It’s tricky transitioning from being a part of a 2-pilot crew to being all alone up there. Most of my career was spent as an airline pilot “crew member” with 2 (or 3) of us flying the plane or working the systems. After 25 years, I left the airline and accepted a position with an air ambulance company flying a turbo commander and had to quickly learn the importance of single pilot resource management.

Never have I felt so alone as I did on those first few flights. I had no one to bounce ideas off of, no one to help with decisions or briefings or preflights in the middle of winter. One of the most challenging transitions was the lack of a checklist challenge and response rhythm. Single pilot resource management was a new concept to me and I had to learn how to make it work.

I felt a little stupid reading the checklist out loud to myself, but I knew the dangers of complacency so I kept at it until it became my new normal. Unfortunately, some pilots have decided that familiarity somehow made a checklist an unnecessary tool and choose to disregard it all together, relying on their own memory instead. And sometimes they suffered fatal consequences because of it.

Without a co-pilot on board, single pilot resource management mandates the use of a checklist as a necessary and critical part of flying. There are hundreds, if not thousands, of examples of flights ending badly, if not tragically, when the checklist is left in the side pocket.

A sad example is a King Air B200 (single) pilot who was routinely careless with his checklist usage until it ended up costing him and his 4 passengers their lives. On the accident day, he could be seen doing a walk around and then loading his passengers. He taxied for takeoff and called ready without taking the time to do the required runup. Pilots who observed the takeoff noted that the takeoff run was longer than what they expected, but the engines sounded normal.

The problem occurred at liftoff when the aircraft immediately yawed to the left and failed to gain altitude. As the King Air accelerated, the left yaw became more and more pronounced until the pilot lost all directional control and crashed into a building on the airport property. The pilot and all passengers were killed instantly.

The accident investigation revealed that the rudder trim was in the full nose left position and was ultimately determined to be the cause of the accident. The ADS-B data showed that the left turning tendency began during the takeoff roll and accelerated when the pilot lifted off and gained airspeed.

Sadly, checking the trim position was on the checklist multiple times. Even if he had only chosen to complete one checklist, the rudder trim problem would have been discovered and corrected. Nobody knows how or why the trim was so out of center, but it doesn’t really matter anymore.

A checklist is an invaluable safety device, especially since it is so simple to use. There is absolutely no reason to disregard this life saving tool. But if you would rather skip the list, you absolutely must get in the habit of BFAT.

This simple check would have saved those 5 lives. BFAT before every single takeoff and check the 4 things that have the most potential to kill you. And when I say Airbrakes, I don’t mean to look at the switch or the gauge. Turn around and look at your wings and make sure they are stowed. This is a good rule for multi-pilot crews too.

Single pilot resource management means you need to learn how to manage by yourself. Don’t cheat yourself out of a safe flight by ignoring your best chance for catching errors. Use your checklist every time. And then BFAT before takeoff for one more chance to catch an error.