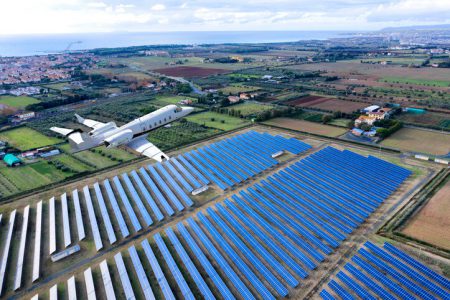 For years aviation has been considered the way of the future. However, the recent presentation of The Green New Deal, calling to end air travel, has raised a series of questions about the role of aviation, as well as the negative impact it has on the environment.

There is no denying the detrimental effect aircraft emissions have on the environment. Indeed, it is estimated that 2% of all greenhouse emissions are a result of the CO2 produced by aircraft. Furthermore, there is a predicted rise in aviation emissions of 3-4% annually, not to mention that the overall increase in greenhouse gasses over recent years has been largely attributed to the growth of air travel. Luckily, there are some interesting options being explored that do not call for the complete elimination of air travel.

It is the high quantity of fuel being burned by planes that leads to the significant output and increase in greenhouse gasses. Perhaps then the most obvious issue to address is fuel efficiency. In fact, this idea has already been highlighted by the International Civil Aviation Organization (ICAO) as they have stated that “medium-term mitigation for CO2 emissions from the aviation sector can potentially come from improved fuel efficiency”. However, it is important to recognize that improvements in fuel efficiency alone will not singlehandedly solve the problem and as the ICAO goes on to note “such improvements are expected to only partially offset the growth of CO2 aviation emissions”.

The United Nations Framework Convention  on Climate Change Kyoto Protocol offers a series of guidelines to create a framework minimizing the impact of greenhouse gasses on the environment and specifically speaks to the role of aviation. Policies like this have encouraged companies to preemptively and innovatively look into aircraft performance and design options. Airbus has started to explore alternative energy methods including, fuel cells, solar panels and body heat. A Slovenian company has gone as far as to demonstrate a battery powered aircraft that can be used for shorter flights.

Another idea being explored includes a close look at how planes fly and recommends that rather than the standard single ship, aircraft fly in formation to help reduce drag and fuel burn, resulting in lower total emissions and, ideally, an increased aircraft performance. Regardless of the most successful method moving forward, it is apparent that significant adjustments must occur and it seems just as likely that these changes will not result in aviation becoming obsolete.

Flight Planning Ease is One Feature of Honeywell’s Anthem