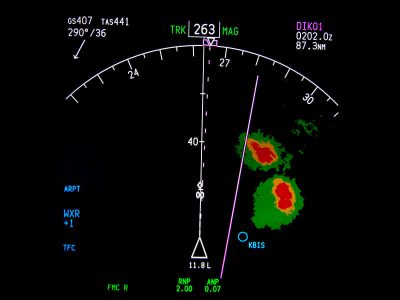 In Part 2 of our series on Aviation Weather Radar, we’re going to discuss the distinction between base and composite reflectivity. I’ve seen these two options on apps like Foreflight, but I never really knew what the difference was. Most of the time, I would click on each one and leave it on whichever was more ominous, trying to cover all the bases, but never really knowing what I was looking at.

It’s time to change all that! Let’s talk about base reflectivity first. NEXRAD radar sends out beams in a 360 degree circle at multiple elevations. The lowest (base) elevation is usually 0.5 degrees, and the beams go up from there.

When you are looking at a “base reflectivity” image on your radar, you are only looking at one of the radar beams, usually the lowest one of 0.5 degrees. This is also called the lowest tilt option on Foreflight. So what is the point of even having this option? Wouldn’t an image from multiple beams be more accurate? Well, It depends on what you’re looking for.

The lowest beam gives you the best idea of what is falling out of a cloud onto the ground. It shows the core of the storm and if you are flying beneath the clouds, the lowest tilt radar image will give you an excellent idea of what you can expect in terms of precipitation. Base reflectivity is also useful for observing lower level storm cloud signatures. These include the hook shapes made by a tornado, low level outflow boundaries caused by gust fronts and low level circulation patterns at the bases of storm cells.

Unfortunately, though, the base reflectivity can make a storm look smaller than it really is. And the lowest tilt option does not necessarily tell you what is happening at higher altitudes, especially in the flight levels. In other words, you could be in for a rude awakening when you climb above the lowest tilt altitude and into the nasty weather that was not shown on your radar.

Flying in the “base reflectivity” radar position is also not advisable in mountainous terrain. Since your radar is only sending out one beam at a relatively low altitude, a storm may be completely invisible if the beam is being blocked by the mountain.

To get a better overall picture of what you’re trying to avoid, you should look at the “composite reflectivity”. In a composite radar image, the returns from multiple beams are combined to create one image that displays what is happening at all elevations in the storm. This is very important because in the early stages of a thunderstorm, the precipitation is usually held up in the air from updrafts. But as we all know, as the storm matures, those suspended droplets will come crashing to the ground in the form of downdrafts. It’s best to be prepared for the entire life cycle of convective weather.

So which image should you choose?  Maybe a little bit of both, depending on your phase of flight. Just make sure you know which one you’re looking at. The base reflectivity image might make the storm appear smaller than it really is, while the composite view may make the storm look bigger than it really is. Be smart and stay clear of either radar image and live to fly another day.

In Part III of our radar series, we will discuss the many benefits (and some drawbacks) of Data Link Weather, specifically, ADS-B. Stay tuned!