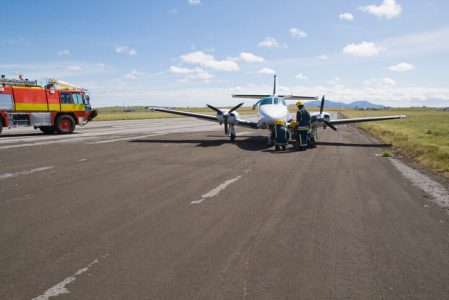 Pilot training covers a variety of subjects that have to do with preparing for an event; preparing for takeoff, preparing for descent, preparing for approaches, and landings. Preparing yourself mentally and physically for what is to come. But I don’t remember the simple act of preparing the flight deck as being on the list of required tasks on my checklists.

Unfortunately for a Piaggio Avanti crew, a little more preparation might have prevented a landing incident that damaged their aircraft during heavy braking. (But honestly, it could have happened to any one of us.) What they did, we all do and we can all learn from their lesson.

The timing couldn’t have been worse. The Captain was flying and during the landing, his water bottle fell from the cup holder and lodged itself between the left rudder pedal and the side wall of the aircraft. Now I don’t know about you, but I always have a bottle of water or some sort of beverage in my cup holder and I often catch it as it’s falling one way or the other with braking or takeoff thrust, or even turbulence.

But in the Avanti incident, the bottle fell all the way to the floor and after some swerving and control issues, the Captain told the SIC that he had the aircraft. As the SIC struggled to keep the aircraft on the runway while applying maximum braking, the Captain bent down to retrieve the bottle. As he did, the tires blew and the aircraft came to a screeching halt, fortunately damaging their egos more than the aircraft itself. The tires were blown and they had to be towed back to the ramp.

Of course, it could have been worse. Jammed control surfaces can be deadly, so this crew was very lucky. Like I said though, this incident was preventable. If the crew had taken the time to secure all loose objects, including water bottles, it would have been a normal landing.

For those of us flying professionally, sometimes we fly the same plane for days at a time. I like to make a nest on my side when I know I’m going to be there for a while, but maybe I (we?) should pay closer attention to the loose objects that I frequently ignore.

Pilot training doesn’t emphasize this enough, but we should take the time to secure items from rolling or falling at the worst possible moment. It will only take a minute, but it sure could save a lot of time and embarrassment if something unfortunate should happen.