Pilot Training Accident Blamed on Spatial Disorientation. What Else? 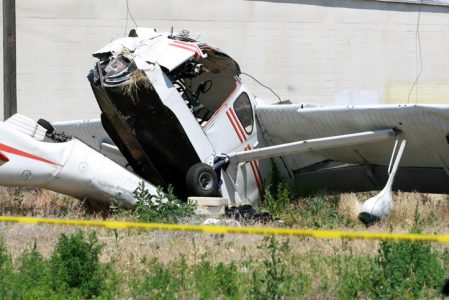 I often read accident reports and try to imagine how I would have handled the emergency, despite the fact that I have no way of knowing all of the contributing factors. A recent example is an accident that occurred in Geneva, Florida during a training flight in a King Air C90. The probable cause of the accident was spatial disorientation, but I have a hard time understanding that since there was an experienced instructor on board with 4800 hours of flight time. Why wouldn’t he have taken over the flight when the student became disoriented?

The student was a 243 hour commercial pilot receiving instruction as part of a high performance aircraft course. There was also a second commercial pilot on board, observing the student performing instrument approaches. All 3 occupants were killed in the accident.

The aircraft stalled and crashed into Lake Harney while attempting an ILS approach into Orlando Sanford International Airport. This was the student’s first flight in a King Air and he was flying in actual instrument conditions of 800’ broken with a 1600’ overcast. In between the first and second approach, the airport changed landing runways and the pilot requested extended vectors to give himself more time.

The controller issued a series of gentle turns and descended the flight to 1600’, which they were told to maintain until intercepting the localizer. The radar track data showed a smooth and consistent flight path, indicating that the autopilot was probably engaged for this portion of the flight. It looks like the pilot disengaged the autopilot and began hand flying after receiving the final turn to intercept the localizer.

At this point, the aircraft began descending below the 1600’ required altitude and also started a turn to the south and then to the southeast, ending up at 300 feet, despite two warnings from the controller about low altitude alerts. The erratic altitudes continued with a rapid climb back up to 1700’, followed by a descent to 1400’, before disappearing from radar.

A witness on the ground reported seeing the aircraft flying below the clouds at about 300’, then climbing steeply back into the clouds and finally reappearing, diving vertically into the lake. What a hellacious final few moments for the pilots on board.

What was the instructor doing? A simple “I’ve got it” should have been enough to recover from whatever was happening to the aircraft. Even re-engaging the autopilot would have stopped the wild ride. Why wasn’t the instructor able to save the aircraft?

The toxicology results for the instructor indicated that he tested positive for oxycodone, a very bad mix for flight instruction in a high-performance flight, with a low time student in an unfamiliar aircraft. This accident once again reinforces the idea that drugs and flying don’t mix and are never, ever a good idea. In the end, it was just another accident that should never have happened.