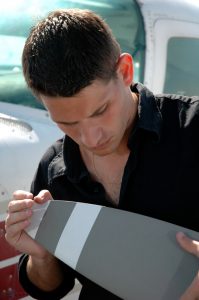 Pilots can benefit from Crew Resource Management during checklist procedures

How many times have you done a simple walk around? Just a routine preflight, starting here and ending there. A hundred times? A thousand? And you probably use Crew Resource Management (CRM) to do it, even if you don’t specifically call it that. The Captain usually does the inside, while the FO takes care of the outside. Easy as pie, we all know our job and we trust that we’ve all done our jobs correctly and well. But somewhere in the back of my mind, I remember hearing the term “trust, but verify.” Whoever first said that was right on the money.

Case in point: I was recently at a small, uncontrolled airport in the middle of Tennessee. It was one stop of many and we still had a long day ahead of us. We ordered fuel and grabbed something for lunch while waiting for our people to return. When I got the call that they were on their way, I paid for the fuel and went out to get the clearance and all that other stuff.

But here’s the problem, my co-pilot and I were both Captains that day. We swapped seats every couple of legs and had a very relaxed crew hierarchy for the entire trip. Too relaxed. Looking back, it’s much easier when there is a definite Captain and a definite FO – But there wasn’t, so we just kind of “got er done.” Only we didn’t.

When we landed at the next stop, we again ordered fuel and went inside. Soon after, the fueler came in and asked us about our fuel cap’s location. Uh oh. It was single-point refueling with a fuel door that latched closed, so if it wasn’t there now, then it was doubtful that it was there when we took off. Double uh oh.

Sure enough, a phone call to our last stop located the missing cap. Apparently, the fueler took it off and placed it on the back of the truck for convenience. Guess who didn’t check the fuel door when we were ready to depart? Not me, and not my #2 either. Neither one of us did!! That was a tough call to make to the mechanic back home and an even tougher call to the boss.

Strict adherence to CRM would have prevented this embarrassment. We were lucky. Others? Not so much. Interrupted preflight duties have been the cause of numerous fatal aviation accidents. Remember the corporate jet that attempted a takeoff with the gust lock still installed? No one survived that accident. I’m sure that “remove gust lock” and check the flight controls were listed on the checklist, but it was missed for whatever reason.

What about pilots of single-engine airplanes who take off without a fuel cap? Studies prove that fuel can be sucked out without a fuel cap in minutes. Even conscientious pilots forget to lock the baggage door, forget to verify that the proper fuel load is on board, forget a lot of important stuff, and it’s because they were distracted. We can do better. We HAVE to do better.

Use CRM to delegate all tasks, even if you think they’re obvious. Confirm that tasks are done, use your checklist ALL OF THE TIME and trust but verify as though your life depends on it.