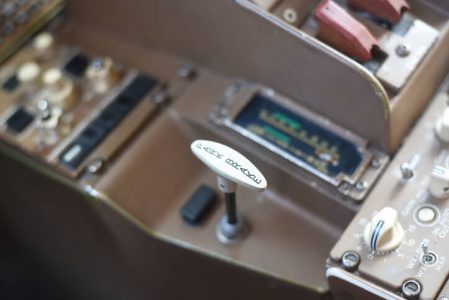 “BFAT” is The phrase that my FO lovingly says to me before each takeoff – Crew Resource Management at its finest. No, he’s not reminding me to stop at Dunkin Donuts on the way home; he’s trying to keep us alive. The phrase is not found anywhere in our checklist, but it’s burned into our brains: Brakes, Flaps, Airbrakes, Trim. A quick reminder of the things that could kill us. BFAT.

I always thought the “B” was unnecessary. I mean, wouldn’t it be evident that the parking brake was on – the plane wouldn’t move, right? Or at least it would need an insane amount of power to get going.

Except there was that one time when my co-worker was flying an Aero Commander. He was cleared into position flying on a runway with snow and patchy ice and set the parking brake because it would be a minute or two. When he was cleared for takeoff, he shoved the power levers up, and off they went. Acceleration was slower than usual, but he attributed that to the icy patches. Finally, he realized something was wrong around 80 kts when they should have been airborne already.

It was the parking brake. He saw it out of the corner of his eye, pushed it in, and the aircraft leaped forward as though he had just engaged the afterburners. Well, maybe not quite like that, but the difference was night and day. So I guess it CAN happen, which is why the B in BFAT is a critical part of our takeoff flow, and it should be for yours too.

Case in point: the NTSB just released their preliminary findings on a recent fatal Citation accident in Connecticut, and it sounds like BFAT would have saved their lives. The jet’s parking brake handle, and the respective valve it controlled, were both found to be in the “brake set” position.

The accident investigation found tire skid marks on the runway and the flight data recorder (FDR) reported that the aircraft was still in a weight-on-wheels state until past the departure end. It also measured acceleration and they found that the accident values were a full 5 seconds longer than the previous takeoffs. When you think about 5 seconds, it isn’t that long, but it certainly is a long time not to be accelerating normally.

For this model Citation, the FDR does not record parking brake position and the TO Config warning system does not include the parking brake in its activation logic, so it really is up to the crew to make sure the brake is off. Crew Resource Management can make a big difference in safety when both pilots are aware of specific “gotchas,” and together, they find a way to make sure it doesn’t “get them.” BFAT.

PrevPreviousFAA Regulations: The Preflight You Cannot See
NextPilot Training for Instructors and Students Gets a BoostNext