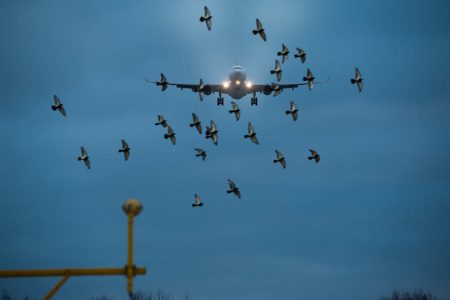 Wait. Did I read that right? According to both the FARs and the AIM, a pilot can be held responsible when his/her airplane strikes wildlife (mostly birds, but also deer, racoons, kangaroos…). That doesn’t sound right. But sure enough, I was reading an article about Bird Strike hazards and there it was: FAR 91.103 says that “Each pilot in command shall, before beginning a flight, become familiar with all available information concerning that flight”.

Well yeah, but… how are we supposed to know where the birds are? What exactly does “All available information” mean? Sure, embedded deep within that regulation will be specific requirements regarding the pilot’s knowledge of aircraft performance, weather reports, operational equipment and delays along the route, but now we have to know the locations of birds? Turns out, yes. Have you ever read a NOTAM or heard an ATIS stating “birds on and in the vicinity of the airport”? There ya go. You’ve been warned.

When interpreting regulations, statements such as “All available information” can be about as clear as mud. It’s like the “careless and reckless” clause when discussing safety…it can apply to just about anything if regulators try hard enough. If a NOTAM for bird activity or wildlife activity is published for an airport, you are responsible for avoidance, even if you didn’t take the time to actually read the NOTAM or listen to the ATIS.

Part of the problem is that the phrase “Birds on and in vicinity of airport” has become so commonplace that most pilots just take the warning in stride. We dismiss the significance of the announcement because it’s too general. There is no way for us to know the type, location or movement of the birds. But birds and wildlife strikes are a serious hazard to aviation. Not only are they a threat to the safety of an aircraft (just ask Sully), but they also cost the aviation industry $229 million dollars in 2015. That is significant.

Ongoing research is trying to determine the best way to maneuver to avoid birds, if you have time, of course. It used to be thought that all birds would dive to avoid a collision and that the pilot should always climb when encountering a flock of birds. That theory has since been proven to be a myth. But there is new research that has shown interesting results –

The experiment showed that birds on a collision course did indeed change altitude, but whether they climbed or descended was purely random. What was absolutely certain, however, was that irrespective of altitude changes, the birds always turned to the right to avoid a midair collision. Always! It might therefore be worth a try to have airplanes make a momentary right turn to avoid a potential collision when approaching a flock of birds.

Advances in technology may soon give pilots more definitive information about decreasing the airborne threat of bird strikes. Ground based radar specifically designed to identify birds is looking promising. But in the meantime, pilots will have to continue to practice the “see and avoid” method of sharing the skies with birds as they adhere to the FAR/AIM policies regarding bird strike hazards.