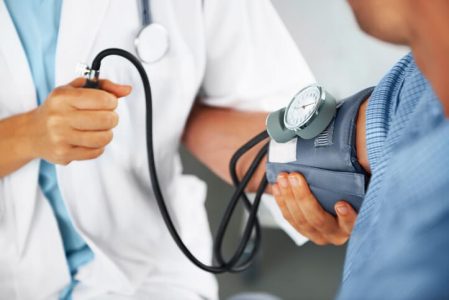 I’ve always wondered if the nurse at my FAA First Class Medical knew that I was belly breathing in a desperate attempt to lower my blood pressure. I’ve heard that breathing so that your stomach visibly rises is an effective way to lower your BP instantly, but it’s hard to do it without anyone noticing. I don’t know if any of you have White Coat Syndrome (high blood pressure when around doctors), but I’ve got it in the worst way.

Now there may be an even better way to pass the dreaded blood pressure test every six months. We all know why blood pressure is so significant to keep under control; the “silent killer” has no symptoms but leads to devastating consequences when left untreated. A healthy diet and exercise have been the gold standard for decades, but a new study shows that a simple breathing technique may work as well as prescription drugs (and you won’t look ridiculous doing it).

The breathing technique is called “High resistance Inspiratory Muscle Strength Training (IMST). It even sounds more official than belly breathing. Researchers from the University of Colorado say that learning how to do this for 5 minutes a day could help you pass your pilot medical and fend off cardiovascular disease.

IMST has been around for about 40 years, so it’s not new to the medical community. The technique was developed to help critically ill respiratory patients strengthen their diaphragm muscles to preserve their breathing. To do it, you inhale deeply through a hand-held device that provides resistance.

To determine whether this was an effective blood pressure treatment, the researchers tracked 36 otherwise healthy adults with high systolic BP. Half of them did High Resistance IMST for 5 minutes a day for 6 weeks. The other half used a placebo with much lower resistance.

The clear winners were the IMST group. They enjoyed:

Even after stopping the resistance breathing, the IMST participants maintained most of these benefits even six weeks later, indicating longer-lasting effects than you would get from traditional exercise. In addition, these respiratory training devices are inexpensive and easy to find online. Just make sure the one you choose allows you to set your resistance level so you can get the most bang for your buck.

Pilots can have a tough time adhering to any exercise plan with our crazy schedules, and the side effects of prescription drugs can be disqualifying for our FAA First class medical. However, a simple thing like IMST might be just the ticket. It may be worth a try.