Flight Physiology and Varying Body Types in the Cockpit 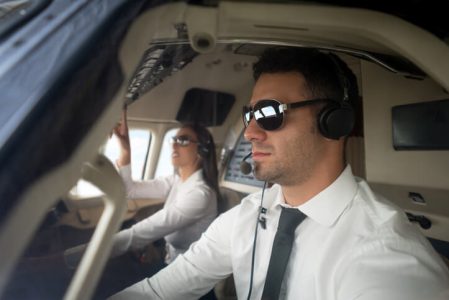 How Gender Differences May Affect Stressors of Flight

While the pilot population as a whole is largely male, more women are beginning to pursue careers flying. This has raised some interesting conversations regarding flight physiology and the areas where there may be room for change.

A General Suitability and Some Notable Differences

There are several health requirements deemed necessary in the interest of aviation safety. Being a pilot comes with varying standards that must be adhered too, even when applied in physiological areas where gender differences may play a role, such as vision, hearing, and decompression sickness.

For example, vision complications are one of the most common medical disqualifiers a pilot may encounter. While there are several corrective options for poor vision, there is no such approved fix when it comes to color blindness. Color blindness is much more common in men than women. In fact, around 8.5% of the male population in America suffers from some form of color blindness. While only about 0.5% of the female population have the same issues.

[side bar for discussion…The medical standard in 14 CFR Part 67 indicates that pilots seeking any class of medical certificate must have “the ability to perceive those colors necessary for the safe performance of airman duties.” So while males are disproportionately affected, they must still adhere to this standard. Yes, there are some ways around this, such as being limited to day flying, passing an alternate test, or successful completion of an OCVT – operational color vision test]

As far as aviation safety is concerned, pilot hearing is arguably just as important as vision. Men tend to have worse hearing and experience an earlier onset of hearing loss than women. For our scuba diving pilot enthusiasts…did you know that men are less likely to experience decompression sickness than women (some studies indicate up to 4 times less likely).

There are several additional physiological factors that need to be considered. Cockpit design can be problematic for women. Military specifications, better known as “mil specs” have set the precedence for cockpit design throughout the aviation world. These mil specs were designed to meet the physiological needs of men, accounting for 90% of the average male population by eliminating the bottom 5% and the top 5% of men. However, more than 75% of women fall under this predetermined 5th percentile, meaning that the vast majority of women are relatively “too small” to work in the provided cockpit environment.

Reaction time is another important physiological factor when flying. Women have demonstrated a better averaged reaction time as well a larger capacity to work multiple issues at one time through multitasking, while men rate lower in terms of flight discipline and checklist discipline.

Pregnancy is perhaps one of the more obvious physiological differences. While the effect on pilots is just beginning to garner more attention, it comes with very obvious challenges for female pilots and may create additional stress and fatigue-related concerns for those pilots who have a pregnant partner or recent new-born at home.

Regardless of gender, it is important for pilots to have an understanding of flight physiology and how it affects all body shapes and anatomy. Recognizing the differences in physiology can help further develop effective technology to enhance the performance of both women and men in their aviation careers.

PrevPreviousOnline company manual training – how does that happen exactly?
NextAircraft Performance: The importance of knowing your aircraftNext