Flight Physiology and Your Quality of Sleep 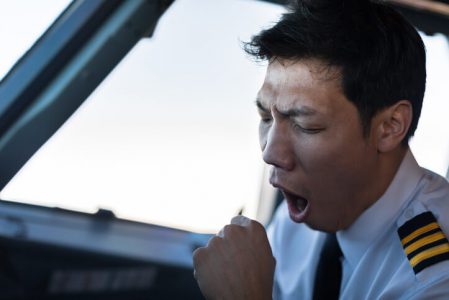 Ahhhh, the elusive search for sleep. If you’re anything like me, you might as well be looking for a pot of gold at the end of the rainbow, but if you care at all about flight physiology, you’ll pay attention to the results of some new sleep studies. You may think it’s just a nuisance when you’re staring at the clock in the middle of the night, but it turns out it’s a bigger deal than you may think, especially for pilots who need to bring their “A” game to a potential engine failure or ILS approach to minimums.

Scientists have been warning us for years about the negative effects of sleep deprivation, but they are just now beginning to back up their warnings with cold, hard, eye-opening facts. And it should get your attention.

A group of researchers, led by Dr. Simon Archer, recently conducted a clinical sleep trial to assess the effects of sleeping fewer than 7 hours a night. The volunteers were allocated to 2 groups… the first group was told to sleep for 6 ½ hours per night and the second group was told to sleep for 7 ½ hours. After a week, the researchers took some blood samples and the groups were reversed so the first group added an hour of sleep each night, while the second group had to reduce their sleep by an hour.

The volunteers were given computer tests and it was no surprise to see that the volunteers with fewer than 7 hours of sleep struggled with the mental agility tasks. But the most interesting results came from the blood tests. The Doctors discovered that approximately 500 genes were affected-  the activity of some went up and some went down. When the volunteers had reduced sleep, the genes associated with inflammation, immune response, and get this…. response to stress became increasingly active. The team also saw increases in the gene activity associated with diabetes and cancer risk.

When the volunteers reversed their sleep patterns, the gene activity reversed as well. The “bad” genes that had become increasingly active with less sleep reversed their activity and became less active with more sleep. I know that sounds complicated, but hopefully you get the point – We need sleep!  And we need more than 7 hours, a tough request for pilots with an abundance of 3 am wake-up calls.

Another recent study, carried out by the University of Rochester Medical School, discovered that the quality and quantity of deep sleep impacts the glymphatic system, a network of plumbing in the brain that piggybacks on blood vessels and pumps cerebral fluid through brain tissue to wash away waste and toxic proteins.

Sleep often becomes lighter and more disrupted as we age, so this is a pretty big deal for the pilots responsible for staying alert and making split second decisions. Flight physiology can have a huge impact on your safety, so do your genes a favor: go get some sleep!