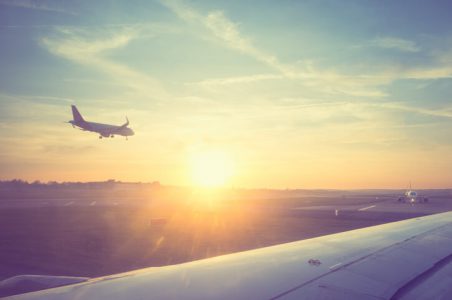 Oh boy. Another crew landed at the wrong airport (ACN: 1513320) and as luck would have it, the airport was in Class D Airspace. No judgement here! But there are definite lessons to be learned.

It was an experienced ATP rated crew flying a corporate jet, with thousands of hours in type. Sounds like everyone I know. The trouble was, it was late afternoon and the sun was just on the horizon and directly in front of them. Yup, I’ve been there too. Forward visibility was greatly restricted due to the sun angle. They were looking for the airport, which they saw about 5 miles away. They called it in sight and cancelled IFR, but unfortunately, their destination airport was actually still 30 miles away.

Their destination was an uncontrolled field, so they made all the appropriate radio calls, entered the appropriate traffic pattern and landed. Unfortunately (again), the actual airport they landed at was a tower controlled airport in Class D airspace.

They instantly realized their mistake as they were taxiing in and made a quick call to the tower, but the damage had been done. So what can we learn here?

First, Don’t count on ATC. If you say you have the airport in sight, they’re more than happy to release you and get you out of their airspace.

Second, if your destination is still 30 miles away, make sure you’re looking 30 miles away. And refer back to lesson number 1: Even though we all find it odd that ATC didn’t question their ability to see 30 miles through the haze and the glare, the end result is that they didn’t say a word.

Third, glare is a big deal. So much so that the FAA published a study on it (read it here) Glare can dramatically reduce your overall situational awareness. In this incident made it was virtually impossible for them to see the actual destination at such a great distance.

Fourth, expectation bias is a real threat to pilots of all backgrounds. Since ATC advised the crew to plan for a visual as soon as they picked up the airport at 12 o’clock, they were expecting the airport to be closer than it was.

And finally, the crew did not back up the visual approach with an instrument approach. The easiest way to ensure that you never have this problem is to always back up the visual with an actual. Even if it’s your home airport and you land there on a routine basis, glare can ruin your day and make the familiar suddenly unfamiliar. Having an instrument approach selected will make sure that you are lined up with the appropriate final at the appropriate airport.

It doesn’t take more than a minute or two to get the extra security of a backup approach in the box – sun angle and glare can mess with your situational awareness. Be proactive and get it right the first time so you don’t have to explain your Class D (or worse) landing to the FAA!