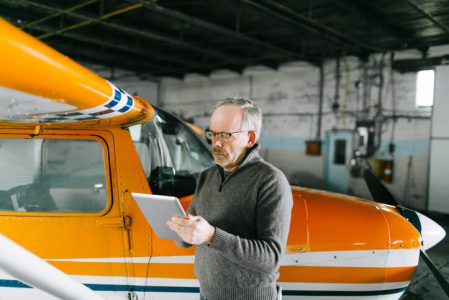 Flight planning is getting easier with online flight apps

With all of the aviation apps available these days, it’s hard to know which ones make the most sense for the type of flying you do. There are apps for flight training, weather briefings, flight planing and even games to play when you’re bored. I saw a list of Apps in a Sporty’s brochure and I hadn’t heard of most of them, so I thought I’d pass along a list of 12 of the most popular aviation apps so you can decide for yourself which ones would make your life easier in the air.

I’m sure most of you have heard of the first two, Foreflight Mobile and Garmin Pilot.

Foreflight is an all-in-one preflight and in-flight app that includes moving maps, approach charts, terrain awareness, weather graphics, weight/balance and flight plan filing, among other things. It’s basically the king of iPad apps and has replaced paper charts and even portable GPS for many pilots.

Garmin Pilot includes many of the same features as Foreflight, but it adds Garmin GTN-style menus, split screens, 50/51/52 integration and international charts. Since Garmin basically invented portable navigation products for pilots, you can’t go wrong trusting them with your tablet and phone apps.

Fltplan Go is a free companion app to the wildly popular FltPlan.com website. The app allows you to retrieve and store your navlogs and weather briefings and includes FAA charts, moving map navigation, checklists, weather imagery and more. It has slowly evolved to become a complete Electronic Flight Bag App and even though I use Fltplan.com, I had no idea this companion app even existed!

MyRadar is another app I use. It’s free, simple and easy. It shows looping NEXRAD radar for the entire US and it’s easy to zoom in on the area you’re interested in. It’s perfect for preflight weather briefings and go/no go decision making. But here is something that I didn’t know about MyRadar – recent updates have added features like TFRs, Air/Sigmet overlays and route overlays based on N numbers!

The last app for Part 1 of my App review is Aerovie. This is an app that I’ve never heard of, but it looks amazing. It began as a niche weather app, basically focusing on collecting PIREPS, but now it’s grown into much more. It now features complete charts, moving map navigation, in-flight weather, and flight plan filing, among other things. The app has a number of advanced maps and forecast tools and they also have a powerful Apple Watch App. A full subscription costs $69.99/year, but it’s free to download and many of the essential features are also free of charge.

Part II will continue with more Flight Plan App technology to wow and dazzle you!