Flight Planning without NOTAMS: A Shout to Remember 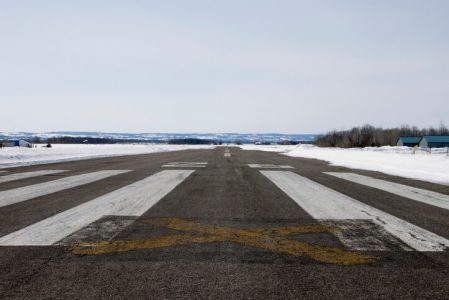 My phone buzzed at 2 AM and I fumbled for the light, desperately trying to wake up and comprehend the dimly lit message. It was a flight request for a trauma patient who needed to get to Burlington, Vermont ASAP. My usual routine when waking up from a deep sleep was to get out the door as quickly as possible and file the flight plan as I drove to the airport. Tonight was no exception.

As an air ambulance pilot, we were trained to be efficient and timely, with an emphasis on safety, of course. The preflight was always completed when our shift started and we kept a close watch on weather and NOTAMs throughout the day/night so we at least had a general idea of what we would be facing.

On this particular night, the weather was not a factor, so I filed my flight plan and quickly took to the sky with my med crew in the back, prepping for the patient. The transfer went smoothly and we were on our way to Burlington in record time. On approach, I picked up the runway lights far enough out to cancel IFR and request a visual, so I made the standard traffic announcements (because the tower was closed for the night) and greased the landing. I was happy to see the ambulance already waiting for us at the FBO, but my happiness was short lived.

A booming voice cut through the silence asking the question “Do you know that you just landed on a closed runway?” I looked around the deserted airport to see where the voice was coming from and there it was… a lone car with headlights moving toward us. Ughhhhh. What did I do?

Better yet…what DIDN’T I do? Read the NOTAMS – that’s what I didn’t do! If I HAD done a thorough preflight briefing, I would have known that the runway at Burlington was closed during the overnight hours to everyone but military operations. It’s ok for the military, but closed for me – on a life saving mission? Well. yes.

The bright runway lights certainly didn’t give any clues that the runway was closed, not that I could use that as an excuse, but I did try. Turns out the FAA doesn’t care if there are huge arrows pointing to a closed runway – closed is closed. There was no way around it, I illegally landed on a closed runway.

I still cringe when I think about that night but the sad truth is, it’s still really hard to read through all the published NOTAMs for a given airport. Certain websites are trying to make it easier for us, highlighting serious notices in red, but the responsibility still lies firmly in the hands of the PIC.

I bring this up because apparently I’m not the only one who is “NOTAM challenged”. I just read an article entitled Crew Flies the Wrong Missed Approach Procedure After Missing NOTAM. Yup, I get it. Their statement, “We failed to notice that the missed approach procedure had a MAJOR change in the NOTAMs”, is about as bad as me saying “but the runway lights were on”.

Landing on closed runways and flying outdated missed approaches can kill you. This is serious stuff. Whatever it takes, you MUST read through the long list of NOTAMs prior to each flight. When you file your flight plan, check for NOTAMs. NO EXCUSES! Just do it!