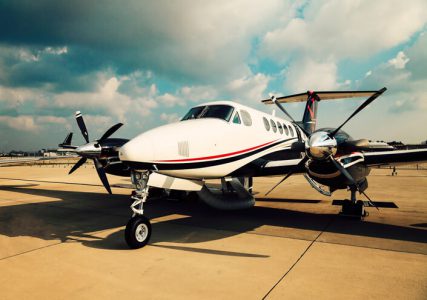 Flying a CATIIIB ILS approach in the weather all the way to touchdown is something you won’t easily forget. It doesn’t happen too often, but when you get to watch your jet land without you, it does get the ol’ heart beating just a little faster. We always made a point to tell the passengers AFTER we were safely on the ground, mostly to proactively prevent heart attacks, but also because it’s a great conversation starter for them on the drive home from the airport. It really is incredible to know that we have the technology for planes to land themselves.

To date, automatic landings are mostly limited to commercial airlines with specially trained pilots using ILS radio signals and onboard autopilots. Other kinds of auto-landing systems exist, but they require runways that are outfitted with a complex and expensive antenna infrastructure. Because of this, auto-landings are generally limited to large, busy airports that are serviced by commercial airlines. Smaller, satellite airports are left out because the expense is simply not practical for the benefits received. But that may be about to change.

A team of researchers at the Technical University of Munich (TUM) have developed an experimental optical positioning system that does much the same thing as an ILS, but without the ground-based equipment. The team has called their system “C2Land” and it uses GPS for flight control and a vision-augmented navigation system for landing.

The computer vision system enables C2Land to recognize the runway and calculate a virtual glide path for the landing approach by processing both visual and infrared light. To test the system, a Diamond DA42 aircraft was equipped with C2Land and the approach and landing were captured on video. It worked! The system flew the approach and touched down precisely on the runway centerline, without the assistance of the human test pilot.

It will obviously be some time before this system is readily available for the rest of us, but it’s exciting to know that it has been developed to the point of real-life testing. This means that autoland systems may soon be available for general aviation pilots flying into small airports with limited infrastructure. It might also add another level of safety to commercial airlines in the near future. The ILS approach has served us well, but it’s definitely time for advances in technology to provide alternatives with greater levels of precision and safety. I, for one, am excited for the possibilities!