ILS Approach In a Sea of White 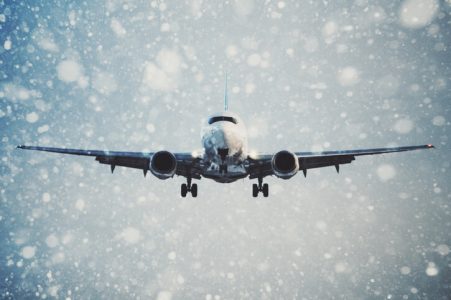 I’m not too fond of snow-covered runways. There’s nothing worse than flying an ILS approach to minimums and breaking out to a sea of white. Although, it’s a little easier at night with the runway lights unless they are also covered in snow.

I’ve recently heard three stories of snow-covered runways that have almost caused an incident (or worse) in the last few months, and in my opinion, that’s a lot. Most recently was when my friend was landing on the leading edge of a big winter storm in the Midwest. He thought the flight would beat the storm, but no such luck.

In this instance, the weather deteriorated as he started his initial descent and was reported as 300 and ¾ mile when he began the approach. He locked up the ILS and broke out with the airport dead ahead. But it was around 4:30 in the afternoon, and it was still light enough for the runway lights to be challenging to see.

As he disconnected the autopilot, he diverted his eyes for just a second, and when he looked out again, it didn’t look right. And remember, he’s only 200 feet AGL at this point. He couldn’t tell where the runway was – everything was white. The runway, the taxiway, and the grass in between the two!

He only had a few seconds to figure it out. But then, he somehow realized that he had drifted just a degree or two and was now lined up with the grass between the runway and the taxiway. He corrected and touched down on the snow-covered pavement, but it could have easily turned out that he landed on the grass. I have another friend who had to go around in a Falcon 2000 last month because he couldn’t identify the runway either.

Imagine you are these pilots. You’re low to the ground, zipping along at 100+ kts in a snowstorm and unsure where the runway is. The safest thing to do is to go around, but what pilot wants to go back into the slag, ice, turbulence to enter a holding pattern while they plow the runway?

I’ve learned from these pilots that when you’re locked up on an ILS approach, don’t take your eyes off the sight picture, not even for a moment. Have the other pilot check the gear one last time or call out the speeds or glideslope deviation. In the simulator, this is one of the big gotchas – as soon as we have the runway in sight, we tend to look back inside and end up diving for the runway. When you do that while looking at a sea of white, a go-around is your best option. Nobody wants that.