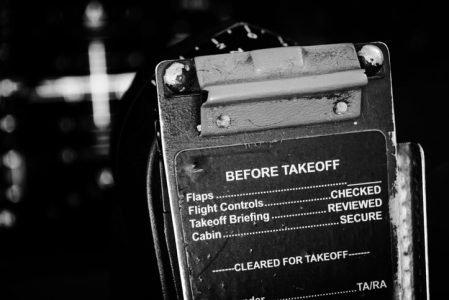 Pilot training taught us never to skip a checklist item – so why do we?

We recently flew the boss between two cities in Tennessee. The flight wasn’t long and we didn’t go very high, but we did learn a valuable lesson that apparently didn’t sink in during all of our years of pilot training – a lesson that I’m slightly embarrassed to share.

When we shut down the engines at our destination, we were both surprised to hear the sound of a jet engine still whining. Looking around, we were horrified to see the APU still in the on position, dutifully doing its thing while burning Jet A for absolutely no reason. Unfortunately, the boss noticed it too – he doesn’t miss much.

The APU was left on for the entire flight. No limitations were busted and nothing was illegal, but I wish I could say we did it on purpose. The truth is, we had no idea that it was happily spinning around back there. But here’s the kicker – turning off the APU is on the checklist no fewer than 4 times! I saw my First Officer with the checklist in his hands, doing the after start, the before takeoff, after takeoff and climb. He did the checklist, he just didn’t “do” the checklist.

There have been numerous studies regarding checklist usage and my First Officer is not alone with his less than stellar results. Even though checklists are an essential defense against pilot errors, they are not foolproof. There are many reasons why checklists procedures are not completed. See if any of these sound familiar in your experience:

Personal Attitude. Pilots have attitudes. We lack motivation when we do the same thing day in and day out with the same results. We think we know what we’re doing without the crutch of a checklist, so we often do our flows and move on.

Distractions and Interruptions. This is an obvious one and leads to errors and omissions since the pilot may resume the checklist at a different place from where the disruption occurred.

Expectations and Perception. I think this was our problem. When the same task is performed over and over, the process becomes automatic. The pilot sees what he/she expects to see, even if what they are actually seeing is only “perceived” to be in the correct position.

Time pressures. If you have a short taxi or are in a hurry for whatever reason, mistakes can be made. Again, it’s easy to look at an item and perceive it to be in the proper position, when a longer look would reveal the actual incorrect position.

Flow. If you normally do a flow first and then read the checklist, not performing the flow can lead to omissions and errors. Similarly, if you perform the flow but not the checklist, there are no checks and balances and mistakes can be made.

Responding without looking. Who hasn’t done this in their career? Again, mistakes can be made when performing the checklist after doing the flow, especially if you are responding from memory. You may be remembering moving the switch on a previous flight. Or you may quickly look at the item and again “perceive” it to be in the correct position.

Poor timing of the checklist. Pulling the checklist out when it will interfere with higher priority items will set you up for errors. Timing is everything.

Checklist performed from memory. When you’ve done a checklist a million times, it’s hard to slow down and read it word for word. In addition, the more familiar the items are on a checklist, the less cognitive effort is required. You can see how this may unconsciously lead to errors and omissions.

And the big one – Failure to initiate a checklist. Distractions, circumstances, or cockiness may lead a pilot to not even begin a checklist. Bad idea.

From one pilot to another, use your checklist, don’t just whip through it, but really pay attention when you are completing it. Remember how attentive you are in pilot training? We wouldn’t even think of doing a sim session without a checklist in our hand. They only take a minute or two and it may just save your life.