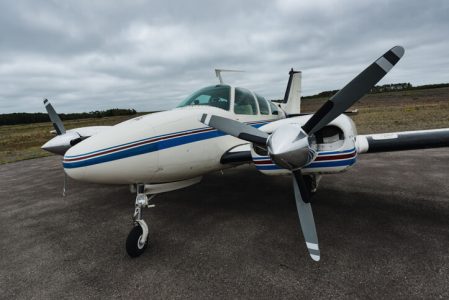 Have you heard what pilots say about the Navajo? They say when you lose an engine, the other one will only take you to the scene of the accident. It’s a pretty dismal prediction, especially coming from the people who have gone through pilot training with the sole purpose of assuring a positive outcome when the unthinkable happens.

Help has arrived for the “piston twin” pilot group, and it comes by way of a Smart Rudder Bias (SRB). You’ve probably heard of a version of this on select turboprops and business jets, but this is a first for aircraft such as the Piper Navajo and Beechcraft Baron. The technology belongs to Garmin, and so far, the Navajo and Baron are the only certified aircraft; based on the reputation of the Navajo, they started in the right place.

The Smart Rudder helps the pilot in 2 ways. The first feature is found on many multi-engine turboprop and jet airplanes and works by adjusting the rudder force to help control sideslip after an engine fails. The second feature is unique to this system. It works with Garmin’s Electronic Stability and Protection (ESP) to help the pilot control the bank and avoid flying too slow, something desperately needed in the world of piston twins.

Piston twins’ popularity has been decreasing lately, and safety issues are undoubtedly a significant factor in this trend. This technology could reignite interest in these airplanes, as long as they are upgraded to modern Garmin avionics. By giving the pilot more time to assess the emergency and take proper action while remaining in complete control of the aircraft, the SRB will help ensure a successful landing after an engine failure.

Multi-engine pilots often feel confused and overwhelmed when experiencing an unexpected engine failure. SRB helps by automatically applying the correct rudder to counteract the yawing tendency before the pilot even realizes which engine has failed. It takes time to think about the dead foot, dead engine mantra, or look at the engine instruments to identify the one that has failed – time that the pilot may not have, depending on the speed and altitude at the time of the failure.

Here’s where this new technology gets amazing: a yellow annunciator immediately lights up on the primary flight display (PFD) to indicate which engine has failed. It can’t get much easier than that! I sure wish I had that during my initial multi-engine training in college. So the yellow light comes on, and at the same time, ESP automatically goes into action. If the pilot does nothing (or takes too long trying to figure out what to do), the ESP will command the autopilot to engage, giving the pilot even more time to get it together. If the pilot is still in the game, though, the ESP can “nudge” the controls to let the pilot know that he/she is getting close to the pitch and/or bank limit. New but temporary thresholds appear on the PFD when this happens, keeping the airspeed above VMC (minimum control speed) and helping the pilot maintain control.

Garmin purposefully created this system as a “supplement” to the pilot flying and, as such, never intended to override the control forces the pilot would typically feel during an emergency. The amount of yaw output is based on the airspeed so the pilot can still feel and recognize what needs to be done to fly the aircraft safely.

Garmin is preparing pilot training videos to teach how SRB works and there is also a pilot’s guide and a supplement to the flight manual for certified aircraft. They are planning on offering this technology to other piston twins, but they have not identified which one will be next. Hopefully, all light twins will soon be able to share in this amazing technology – the safety record of general aviation will most definitely benefit and improve!