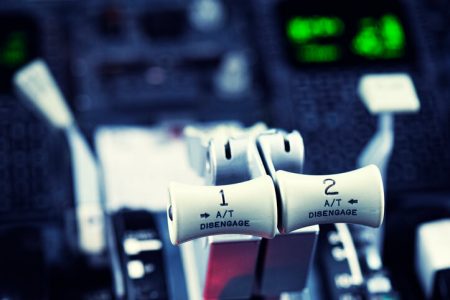 I don’t usually walk away from pilot training with a heightened sense of apprehension, but this time I did. I’m used to recurrent training being mostly preventative; we practice engine failures, rejected takeoffs, and various approaches and then head home with a certificate that says we’re safe for another 6 or 12 months. But this year was more sobering.

When we started the lesson on flight controls, our instructor paused and looked at us intently. “Pay attention,” he said, “this could kill you”. You better believe each one of us sat up a little straighter and put our iPhones away for the moment.

The topic was runaway trim. The kicker was that it was happening for real in our airplane. It had recently happened TEN TIMES (one time, in 10 different airplanes). When you realize there are only 80 airplanes in the fleet, that gets your attention. In one instance, the passengers were calling loved ones to say goodbye. It was that serious.

Runaway trim is nothing to sneeze at in modern jet aircraft, and this training hit home. This meant that a failure of this nature was not only possible but also plausible. I don’t remember ever feeling that way after a recurrent ground school. We spent a reasonable amount of time reviewing the failure and countering it if it ever happened to us.

It’s so easy to get complacent in our procedures. Do we ALWAYS confirm that we can disconnect the electric trim with the disconnect button before takeoff? Is it top of mind to go directly to the red button when the control wheel starts to feel heavy? I had to think about that for a minute. I can see me trying to operate the normal trim for a few more seconds while I processed what was happening. Now I know those few seconds can mean a world of difference in the event of a runaway situation.

Press the button, disconnect the trim, and think later! At least stop the progression of the runaway. Then get it back in trim using whatever alternate means available for your aircraft. Mine has an alternate electric motor, separate from the normal trim command. Many planes have a manual trim wheel. Whatever the case, be intimately familiar with the procedure and instantly carry it out when needed.

The disturbing thing for me is that I knew all of this from previous pilot training. We always discuss trim problems in ground school, don’t we? But this time, I was all in because it had happened multiple times in the real world. That seemed to make a big difference to me, as ridiculous as that sounds. But we don’t have to wait until it happens outside of training to pay attention. Pay attention anyway!