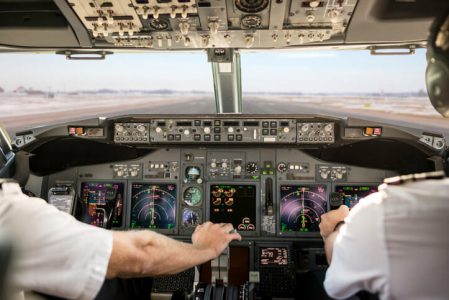 There I was, halfway through initial pilot training for the Falcon 2000. It was rejected take-off day in the simulator, a maneuver that has always been relatively low stress for me – just stomp on the brakes and stop the aircraft on the runway, right? No big deal.

I even wrote a blog post recently about rejected take-offs and the importance of a thorough take-off briefing so both crew members know exactly what to expect. That makes me a pseudo expert on the subject, or at least that’s what I thought.

My First Officer partner was training in a simulator for the first time ever, so I wanted to make sure he understood very clearly what was going to happen. I gave the required takeoff safety briefing that went something like “Before 80, we’ll abort for anything, between 80 and V1, we’ll only abort for something major like a red light, engine failure/fire or loss of directional control and anything over V1, we’ll take in the air” blah,blah, blah… And off we went.

The amber warning light appeared around 95 kts, but we were accelerating so quickly, we were at V1 before I fully processed the light. I saw it was amber, though, so I continued the takeoff, although the rotation was anything but smooth and I was having a heck of a time staying on runway heading.

The simulator paused and the instructor slid his seat forward for a little chat. He asked me to repeat my briefing again. Then he stopped me at the “between 80 kts and V1 we’ll stop for anything major” part. He wondered why I didn’t stop. “Well, Because it wasn’t something major” I said confidently.

It was then that I realized it was the “reverser deploy” amber light and I suddenly understood why I couldn’t stay on the centerline. I rotated with a reverser deployed on one side: classic loss of directional control. Some expert. Do as I say, not as I do.

All I’m saying is we need to think before each takeoff. It’s so easy to get into a routine because nothing bad ever happens until something bad happens. Brief your takeoffs and then do what you brief.

PrevPreviousPilot Training: Using Your iPad in the Dark
NextAdvanced Pilot Training for the Low Time PilotNext