Pilot Training Needs to Include the Basics 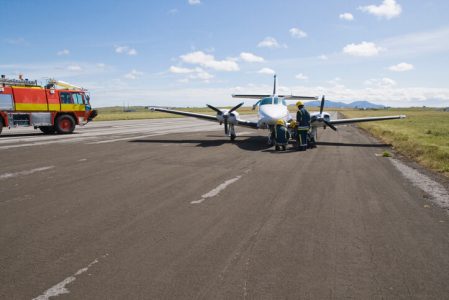 When I upgraded from the Citation to the Gulfstream, the nosewheel “scissors” were a big part of my pilot training. They said, “There are those who have and those who will,” as I was told to always, always, ALWAYS check that the little pin is in after the jet is repositioned. If I don’t, they said, I may not have any nose wheel steering. And wouldn’t THAT be embarrassing? Yeah, it would be, and it was.

I’m sure I’m not the only one who has taxied out and cursed the tiller for not working just before I realized that I might have forgotten to check the pin, and I sure felt stupid that day. I stopped the plane, told the boss what was happening, and had the FO jump out to secure the pin. It only took a minute and we were on our way, grateful that we caught the problem at such a slow taxi speed.

In 2016, the pilot of a Beechcraft 65-A90 in Germany wasn’t so lucky. He, too, had a directional control problem but was able to taxi out to the runway and begin the takeoff roll before discovering his error. The runway excursion that followed was blamed on the gust lock that was still in place, firmly securing the rudder pedals. The pilot said that he had not received training that covered the gust locks for the Beechcraft but was familiar with a similar system on the King Air 200. Unfortunately, this was the first flight where he had accomplished the preflight inspection alone in the Beech 65 and he missed the rudder lock.

Most aircraft with a rudder lock have a chain that connects it to the control column and/or power levers to prevent the pilot from overlooking it, but the chain was missing on this particular airplane. The other warning is bright red paint on the rudder lock, which was also missing on this aircraft as the color had faded to near invisibility. That’s two strikes, but the third strike should never have happened.

Students are taught to check the flight controls before takeoff from the first lesson in the smallest single engine airplane. It is part of every checklist out there (as long as the pilot uses a checklist). The before takeoff flight control check includes all three flight controls: Aileron, elevator, AND rudder pedals. All three must move freely without restriction for the airplane to proceed onto the runway—end of discussion.

The takeoff roll on that day didn’t last very long. The plane veered off the runway as it reached a mere 30 knots. The pilot tried his best to keep going straight, but it was impossible. He exerted enough pressure to fracture the pedal and bend the linkage, but the aircraft still slewed 70 degrees and came to rest in the grass.

The pilot was not injured (except maybe his pride) and could shut down the engines without incident. The investigators noted that the preflight and takeoff checklists did not specify how many gust locks to look for, but the control check should have addressed that issue again. Advanced pilot training does not cover everything. Some things are just expected of an experienced pilot. I think checking the controls before takeoff is one of those things.