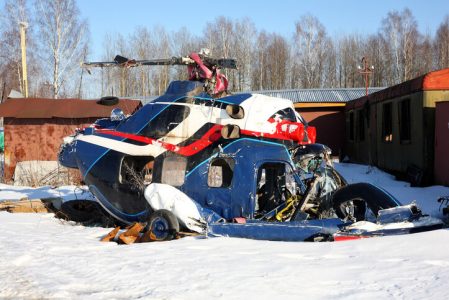 Do you remember that runaway train movie “Unstoppable”? A horse trailer gets stuck on a railroad track, and though they can get the horses out just in time, the train hits the trailer, destroying it. Well, that just happened in real life. Not with horses, but with a pilot. His pilot training may have helped him maneuver the disabled plane to a landing on the railroad tracks, but it was the rescuers on the ground that saved his life.

After the landing, there was a train barreling down on the survivor, and the rescuers only had minutes to free him and get him out of the plane. LAPD was there and got him out seconds before the train hit. And I do mean seconds – the video is chilling.

It’s nice to hear about a happy ending after an aircraft accident- an engine failure right after takeoff does not usually end well. The 70-year-old pilot lost power in his Cessna 172 shortly after takeoff and maintained control to land the plane on the tracks that paralleled the runway.

First of all, good for him for getting that nose down. It sure takes discipline to overcome that urge to pull back on the wheel to hold on to whatever altitude you may already have when you’re so close to the ground. Of course, the dreaded stall/spin accident is the only thing you’re going to get out of that scenario. Secondly, it helps that the pilot was a retired Air Force fighter pilot with a lot of experience in GA airplanes.

Nobody was hurt on the ground, but the pilot sustained multiple injuries to his face and ribs. Apparently, when you touch down on tracks, it doesn’t take long to snag the tires on a railroad tie, which brings you to a stop fast. Watching the video makes it easy to see that the pilot is fortunate to escape with “just” broken bones.

There was another miraculous aviation story the very same week as a medivac EC-135 helicopter crashed outside of Philadelphia and everyone survived! Even the two-month-old patient being transported came out of the accident with no serious injuries!

In this case, the helicopter had a significant mechanical failure while over a densely populated neighborhood. The pilot was able to avoid all power lines, trees, and buildings while attempting an emergency landing in the front yard of a church. The helicopter ended up on its side, but both pilots and the nurse got out with the baby before emergency services arrived.

I’m sure pilot training played a role in both of these happy endings. Even if the training was years ago, the words of a good instructor could live in your brain forever. We often don’t have time to think during an unanticipated emergency, so relying on muscle memory (get that nose down) and keeping those emergency memory items top of mind will be the things that bring us safely back on the ground. A good review before every takeoff will serve us well.