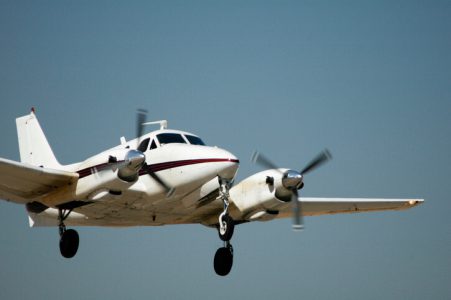 Pilot training may have been a while ago, now may be a good time for a Vmc Rollover refresher

The news report said that the King Air pilots were confused about what was happening to the left engine during the takeoff. I wish they knew they only had seconds left to figure it out. In fact, moments later, the crew and 8 passengers died in a fiery crash. The official cause won’t be known for months, but I suspect it has something to do with a Vmc Rollover, a maneuver we all learn about in pilot training, and is often forgotten in the urgency of a real life emergency.

It’s one thing sitting in a simulator, briefing the engine failure scenario, reviewing the memory items and then launching down the runway with your brain fully engaged and ready for the inevitable emergency. It’s a whole different story when you’re on the line… maybe anxious to get home, maybe arguing with your spouse, thinking about your money problems or the job interview you have coming up. An unexpected engine failure at the worst possible time will kill you, and accidents continue to confirm that.

As a review, Vmc is the minimum controllable airspeed with the critical engine inoperative. When an engine fails, it stops producing thrust and starts creating drag. The “good” engine, however, continues to produce thrust, and if you are still in the takeoff phase, it continues to produce a lot of thrust. This causes the aircraft to yaw and roll toward the dead engine. The rudder counteracts this tendency, but the problem occurs when the rudder reaches its physical limit.

The slower you fly, the less airflow will pass over the rudder, making it less effective at fighting the yaw. Once the mechanical stop has been reached, that’s it. You’re going for a very unpleasant ride. UNLESS….

To regain control of your yawing, rolling aircraft, you must reduce, or eliminate, the power produced by the good engine. If you allow asymmetric power to continue as the aircraft proceeds from the spin entry into a fully developed spin, recovery will be next to impossible. Raytheon demonstrated this fact when they attempted to spin test the Beech 55 Baron using both a normal spin inducing technique and also a Vmc rollover entry.

Their conclusion? The test aircraft responded to the standard spin recovery technique in all but 2 of the maneuvers. Out of 100 spins, all were recoverable except for the 2 that had been initiated with the Vmc Rollover. During these 2 recoveries, spin chutes were required to save the aircraft and the crew. They were otherwise unrecoverable. And these guys were expecting it! They were anticipating the maneuver AND the recovery!

My fiance just returned from Mitsubishi MU2 pilot training in the sim and was describing their engine failure procedures – If they lose one on takeoff, before or during gear retraction, there is no time for hesitation, no evaluating, no troubleshooting or power lever reduction. There is only one thing that needs to be done. Grab hold of BOTH condition levers and immediately feather BOTH engines and land straight ahead on whatever surface happens to be in front of you. I agree that such a procedure is infinitely more advisable than the violent rollover/spin that just about any other action would create, but how incredibly difficult would it be to actually kill both engines in real life?

(Note the above is MU2 specific; in all cases, follow the published manufacturer procedures)

Pilot training is responsible for saving thousands of lives each year through realistic scenarios and practical experience, but it can’t end there. We have to do our part prior to each and every takeoff to prepare for the unexpected. Pilots of multi-engine, propeller driven airplanes have the extra burden of remembering to REDUCE  pitch during an engine failure to prevent the catastrophic Vmc rollover. Brief every takeoff, even if you’re alone, and remind yourself of the correct procedure throughout the entire takeoff roll and initial climbout. Your life depends on it.