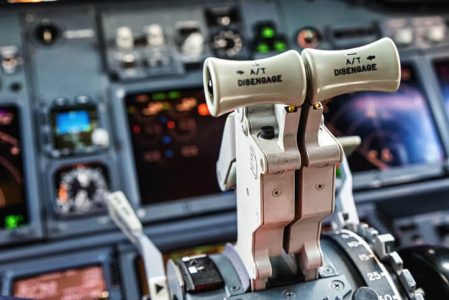 I remember the first time I flew a plane with autothrottles. I was a rookie pilot with UsAir and it was pure magic! Just watching the throttles move on their own as we leveled off or began a descent was fascinating to my newbie eyes. For 20 years I marveled at the technology. Then life happened and I found myself alone in the left seat of a turbo commander with manual EVERYTHING and my single pilot resource management skills were put to the extreme test.

Ok, after all that time with the airline, I’ll be the first to admit that I didn’t have any single pilot skills anymore. I was spoiled all those years with a co-pilot, and quite honestly, I was a bit lost while trying to learn how to fly alone again. Autothrottles for twin turboprops didn’t exist back then. But Innovation Systems and Support (IS&S) is working to change all that, and the aviation world will be safer because of it.

IS&S ThrustSense autothrottles manage engine power beginning with the takeoff roll, then continuing through the climb, cruise, descent, go-around, and landing phases of flight. It is available as a retrofit option on King Air 300 series (with Collins Pro Line Fusion avionics), but it comes standard on the new Textron Aviation King Air 360/360ER. Blackhawk Modifications is now able to upgrade the 200 series as well.

The autothrottle includes engine-out thrust control. If one engine fails, the system automatically sets the good engine to the power level necessary to maintain control if the airspeed drops below minimum controllable airspeed. It also protects the engine from over-torquing during takeoff or over-temping in a climb or at high altitude.

It’s even pilot proof. The autothrottle has a built-in shaker system to warn the pilot if power levers are moved near the torque or temperature limits. (I could have used that a couple of times.) ThurstSense can also be integrated with ADS-B to provide in-trail spacing. Of course, the pilot can always override the system by merely moving the power levers as necessary. It’s just like my Toyota on cruise control! What a great time to be a pilot!

Seriously, I love advances in safety in cars and airplanes. I know firsthand how hard it is to go from automation to manual and then back to automation, especially when you are alone. Single pilot resource management is challenging with weather issues, mechanical failures, etc.; the smallest things can set up the dreaded accident chain without you even realizing it. I’ll take whatever help I can get and autothrottles are near the top of my wish list! I can’t wait until more GA aircraft can benefit from this technology.