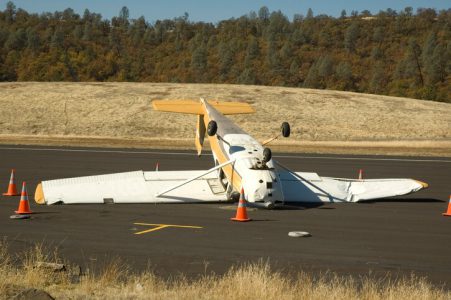 Confession time…I am the laziest pilot in the world when it comes to uncontrolled airport radio communications. I’ll be busy doing a checklist or programming the FMS as we taxi for takeoff at a quiet, seemingly deserted uncontrolled airport, when I’ll suddenly hear my flying partner make a radio call announcing our position and that we are taxiing out for departure on runway so and so. I usually look at him as if to say, “You’re talking to yourself, buddy. Nobody cares.” Or do they….

The other day we were departing from a quiet, rural uncontrolled airport that happened to have 2 intersecting runways. And it also had a row of trees that blocked our view of the departure end of the opposite runway. It got me thinking, “what if”. What if, someone was taking off from that runway and I didn’t hear the call? Or what if someone was landing and rolling out through the intersection?

I allowed myself to let my mind wander a bit. The outcome wasn’t good. There just wouldn’t be time to maneuver. I even let myself imagine the possibility that maybe someone would be landing in the opposite direction, which we sometimes do for convenience if the wind is relatively light. What if that pilot didn’t see us or, far more likely, we didn’t see him?  Again, not good.

The final nail was driven home when I read the accident analysis of an actual runway incursion that ended in fatalities. The scene began similar to my imaginary scenario. Two different airplanes on two different runways, neither one aware of the other. Both made the proper announcement that they were departing from their chosen runway, but tragically, neither pilot heard the other call.

The Cessna 340 saw the 172 at the last second and banked hard to get out of the way. The pilot of the 172 was oblivious and did not see the 340 until he heard the roar of its engines as it passed immediately beneath them. The instructor in the right seat of the 172 watched as the 340 went inverted, crashed and burst into flames.

Clearly, a single radio call announcing your imminent departure or arrival is not enough. Most pilots are busy and distracted as they are taxiing out or approaching an airport and can easily miss important details of a single call, such as the name of the airport and/or the intended runway.

Some may call it overkill, but I am now an advocate for multiple calls, such as:

The same holds true for arrivals. A single call is not enough. Give multiple position updates as you approach the pattern and then, once in the pattern, call downwind, base, final, and clear of the runway. Speak clearly and slowly enough that other pilots can catch what you are saying, even if they are distracted or in the middle of a conversation. Learn the local visual reporting points and landmarks and use them in your communications: “…10 miles north-west, over the water tower, inbound, landing one-eight”.

I am no longer lazy with uncontrolled airport radio communications and realize that lives are at risk without proper communications. This holds true even if you THINK you are the only aircraft around within 100 miles. Err on the side of caution and blast the radio with your position and intentions. The life you save may be your own!

PrevPreviousCTS is at AMTC Demonstrating Online Training Courses
NextPilot Training: How to Become a Professional PilotNext