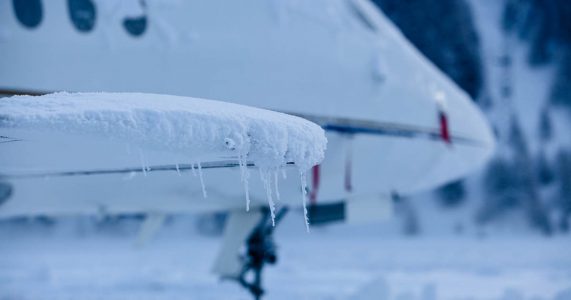 As the days get shorter and the temperatures start to hover at or below freezing, it’s a good idea to spend a few extra minutes thinking about the best time to fuel your aircraft prior to each flight. During the warmer seasons, it’s common to pick up the phone and call in a fuel load without giving it a second thought. When the snow starts to fly, however, fueling at the wrong time can spell disaster (or at least a lengthy delay).

Fueling In The Snow

The weather forecast becomes an integral part of the fueling process when precipitation and/or freezing fog is expected. Leaving an open-ended fuel request can be a bad idea in the winter for both obvious and not so obvious reasons. You wouldn’t want the aircraft fueled just prior to departure in the middle of a snow/freezing precipitation event unless you are planning on de-icing (obvious), but the not so obvious “gotcha” with winter operations involves fueling in the snow and then returning the airplane into a warm hanger.

Depending on the timeline for your departure, it’s very possible that all the snow you picked up during the fueling process will melt during your pre-flight in the warm hangar. The problem occurs when you load up the passengers and head back outside into the freezing temperatures. All that melted snow will refreeze as soon as it hits the cold air and if you are not specifically looking for ice on the wings or tail, you could be in big trouble on the takeoff roll.

If you find yourself with melting snow in the hangar, it may be necessary to dry the entire airplane with towels prior to departure. A far better plan is to leave enough time after fueling to have the snow melt AND dry in the hangar or to fuel at a time when there is no precipitation falling. Both options require excellent pre flight planning but will be more than worth the trouble when you consider the dangers involved with undetected ice on the wings/tail.