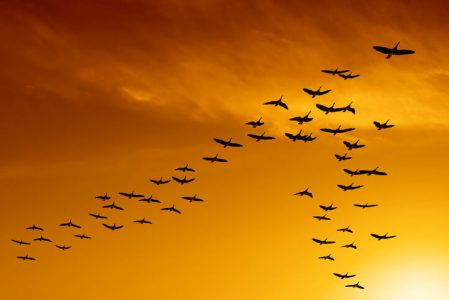 Who hasn’t looked up in wonder at the V-shaped pattern of geese when they’re migrating? Even non-aviation people may glance skyward in amazement when hundreds of geese fly in exact formation over their head, honking, and looking like they’re having a blast. There’s a method to their madness and it looks like mother nature wins in the aircraft performance category!

When I first heard airlines talking about finding a way to mimic geese, I thought they were joking, but they’re not. Airbus is diving into the Wake Energy Retrieval (WER) concept with a project they call “fello’fly”. WER replicates the behavior of the geese and other birds as they fly together to reduce energy consumption. Airlines and manufacturers want a piece of that.

Airbus wants to use the technique of a follower aircraft retrieving the energy that is lost by a leader aircraft by flying in the smooth updraft produced by the wake. They say fuel consumption could be reduced by as much as 5 – 10% per trip when using this concept. And airlines agree. Airbus just signed agreements with two airline customers and three air navigation service providers to demonstrate the operational feasibility of it’s “fello’fly” project in the hopes of demonstrating a reduction in airline emissions.

If you’re thinking that this whole thing sounds really complicated and maybe a little bit scary, you’re right. I mean, aren’t we all taught from our student pilot days that wake turbulence is something to be avoided at all cost? Well, they’re working on it. Airbus is taking on the technical issues of keeping the aircraft safely positioned during flight and the European regulatory agencies that are involved (so far the FAA is not involved) will help define how controllers can bring the two aircraft safely together. The participating airlines have agreed to provide flight planning and operational expertise to collaborate on the requirements necessary for two passenger jets to fly in close formation.

The entire planet will benefit from fewer aircraft emissions and increased performance. Hopefully this concept will turn into reality in the near future!