Aviation Airspace Isn’t Always as Vast as We Think 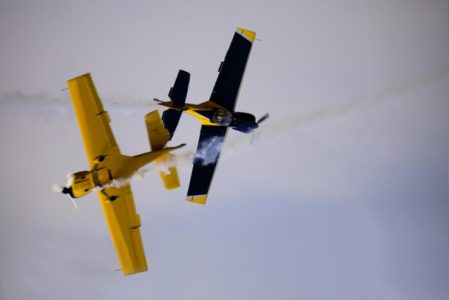 I love pancake breakfasts. There’s nothing like waking up early on a beautiful, clear day and heading to the airport to fire up the ol’ girl, knowing that pancakes and sausage are waiting just a short flight away. There’s only one little thought that intrudes on my happiness these mornings. Yes, aviation airspace is vast and endless, but when countless airplanes, with and without radios, converge on one airport at one time, it scares me a little.

I know of a group of pilot friends that made a weekend plan to scope out fly-in breakfasts and fly together in loose formation. They would all leave at the same time from their local airport and have the time of their lives. It was a summertime ritual. Some would venture out as a couple, some on their own.

One tragic morning, a husband and wife taxied out in their plane and their friend, another member of the group, followed in his. The takeoff was normal, but the faster second plane overtook the smaller first plane, and neither pilot saw the other one until it was too late—three fatalities in the tight-knit breakfast club of the small-town airport.

You would think that with all the new technology available, and the updated requirements like ADS-B, midair accidents would be a thing of the past. But that’s not necessarily true. Another four people recently lost their lives last month when a Cessna 172 and a PA-46 collided under the watchful eye of ATC at the North Las Vegas Airport. My fear escalates to a new level when I think of airplanes colliding at controlled airports.

The details of the Vegas accident seem simple enough. The Cessna was cleared to Runway 30R, and the Piper had been cleared to 30L. Unfortunately, both ended up on short final for 30R. Until the collision, the Piper had repeatedly acknowledged that he was cleared to land on 30L. Was it possible that he did not have both runways in sight? Or was he confused with his clearance, saying the left runway while lining up for the right? We will never know, but something got mixed up.

The Piper was given a clearance to overfly the airport and enter right traffic for 30L. The tower controller must have recognized that something was wrong because he confirmed the 30L clearance for the Piper several times before the collision occurred. The Piper pilot concurred with the controller’s query, yet he flew the final to the wrong runway. There were no last-minute emergency calls for a go-around or immediate turn for either airplane. I can’t imagine how this could have happened.

If we’re all using the same aviation airspace, there is the possibility of midair collisions. It’s up to us to do everything in our power to see and be seen and to listen and obey all ATC instructions. If we are not using flight following on a VFR day, our heads better be on a swivel when we enter an area where it could be busy – pancake breakfasts spring to mind. Just be careful up there and keep your eyes open.