Aviation Weather: A Weekend Story of Staying Ahead of Winter Weather 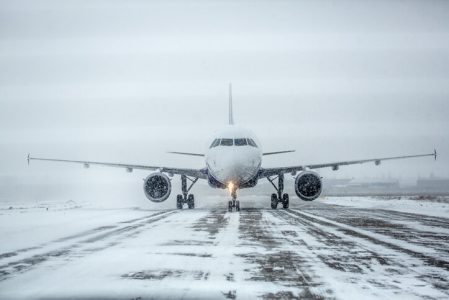 Best to deal with aviation weather before it arrives

Is it Spring yet? No, don’t answer that. I can see the date on my phone. Weather in the dead of winter and its affect on aviation are such a Debbie Downer. I’m sitting in my hotel room with one more day to go until my flight home. Normally I would be happily looking forward to packing my bags and getting out of here, but there’s just one little thing holding me back. Beginning this afternoon, we’re expecting a major winter storm that is forecast to stick around until Tuesday – today is Saturday. So instead of planning what I’m going to be doing on my upcoming days off, I’m staring out the window, thinking about the extra steps I’m going to have to take to fly out of a winter wonderland.

The boss is here on a skiing trip and our departure time isn’t until sometime after dark tomorrow night. The FBO closes at 5 PM so special arrangements have to be made to bring them back out here for our departure. (Oh, how easy it is to fly on a warm, summer night…. I would just have them pull the jet to the ramp and send them on their way). But not tomorrow. Nope – we need the hangar right up until the engine start checklist.

What about fueling? Definitely premeditated. We can’t ask for fuel before departure because the airplane will be instantly covered with 6 inches of snow, which will require hours in the hangar to melt. And then when we finally pull the plane back out for departure, all the moisture from the snow melt will re-freeze, so it will have to go back into the hangar. No, this definitely requires prior thought and planning. The fueling has to be done today at the latest.

And what about the runway and taxiway condition? This is a small, uncontrolled airport in Idaho and I don’t think it is routinely plowed in the middle of a snowstorm (as soon as they’d finish, they’d have to start again). I’ll have to add that to my list too… I can hear it now – “Not only do I need you to come back after hours, but would you mind plowing the runway again so that one airplane can safely get out of here?” I can’t wait for that conversation.

What else? Oh yes, the airplane will have to be cold soaked before we pull it. We don’t want the falling snow to melt when it hits the warm wing and then freeze again when the warm wing turns icy cold a few minutes later. So even though we will load the passengers and bags in the hangar, it won’t be a warm hangar. Heavy sigh.

I’ll definitely select a takeoff alternate, since there is no way I’m going to return to an airport in the mountains during a snowstorm, and we’ll brief the heck out of our departure procedure, just to make sure there are absolutely no questions. Let’s see, what else….. I’ll have to get a void time for my IFR clearance and then have all the proper frequencies set up so we’re not fumbling to talk to someone.

I think that might be it, but clearly I have some work to do this afternoon. Pilots who wait until the day of departure to think about these things usually don’t last very long with their employer. It may help to make a list of the major items that need to be considered for a winter departure, starting with a note to keep a close eye on the aviation weather forecast for your scheduled flight. Surprises are great for birthdays, but not so much when the boss is pulling up to the aircraft.