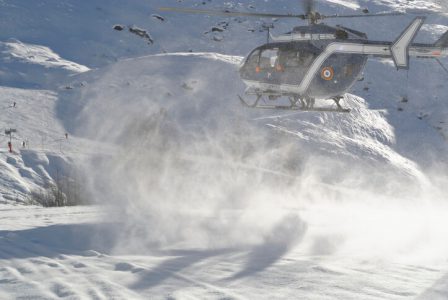 I was driving home last December on a nice day in upstate New York when all of a sudden, a squall line came blasting through and my whole world disappeared in a sheet of white. I had the luxury of slowing down and pulling over until the worst of it blew past, but pilots aren’t so lucky. In the aviation world, weather can easily turn hazardous, and not just for the obvious reasons.

Wintertime illusions have caused dozens of aviation accidents, and not all of them involved novice, VFR only pilots. Even the most experienced pilots can become disoriented when transitioning to a visual approach when the conditions are right (or maybe I should say “wrong”).

Most pilots are familiar with the term “whiteout” because of the dangers created by the condition as they drive their cars. A whiteout is simply a loss of visual cues caused by blowing snow – drivers in the northern states have all experienced this phenomenon at one time or another. It’s pretty scary when it is impossible to know if you are still on the road or anywhere near other cars, but stopping where you are is always a possibility.

For pilots, however, there is nowhere to pull over when a loss of depth perception occurs as the horizon disappears and all visual references and orientation are lost. Helicopters are especially susceptible to the dangers of a whiteout at low altitudes because the rotor wash creates swirling snow and envelopes the helicopter. Even though the phenomenon is self-induced, it is still dangerous and very difficult to avoid.

“Flat light” is different and perhaps even more dangerous for a pilot to recognize and avoid. Most of us think of mountainous terrain when we hear of CFIT (Controlled Flight into Terrain) accidents, but it’s not always that obvious. Flat-light conditions are also responsible for countless CFIT accidents and it is therefore worth talking about.

According to the NTSB, flat light occurs when the sky is overcast, especially over snow covered terrain and large bodies of water (think John Kennedy Jr). In flat-light conditions, there are no shadows. Visual cues, such as terrain features, are masked, making it very difficult for pilots to perceive depth, distance or altitude.

Many times, it is impossible to even distinguish the sky from the ground at all. This lack of contrast makes it extremely difficult to perceive aircraft closure rate, speed and distance from outside objects. The real risk in flat light conditions is when the pilot doesn’t realize what is happening.

At lower altitudes, when flying VFR, even while on an IFR flight plan, pilots tend to rely on outside references to judge aircraft altitude. But when visual references SLOWLY disappear, the distinction between the ground, horizon and sky become unclear. This is when flat light training and recognition can prevent accidents.

Regardless of your flying experience and ratings, you are susceptible to flat light issues. Just knowing that it exists will help improve your safety margin, but if you find yourself in a flat light condition, fly an instrument approach if one is available. If not, find a reference point that you can keep in sight until you are safely on the ground.

It’s easy to let your guard down when you break out of the clouds and find yourself in VFR conditions, but be aware of the potential dangers when the aviation weather is ripe for creating illusions. Pay attention to your instruments and find a ground reference to use all the way to the runway. Awareness is critical when the horizon disappears.