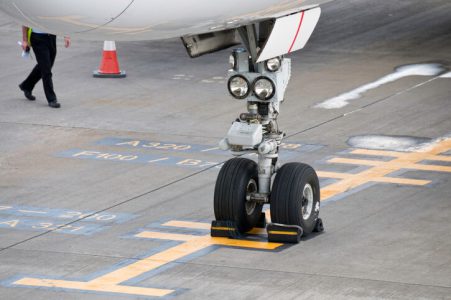 A couple of weeks ago, I began to taxi toward the active runway and quickly noticed that the steering tiller had absolutely no effect on where the aircraft was heading. No matter how much I turned the tiller, the aircraft continued straight ahead, regardless of how frantically the marshaller was waving his arms, directing me to turn THAT WAY. I was fresh out of pilot training and even though we had reviewed the torque link pin many times, I guess the lesson didn’t quite stick.

The purpose of the torque link release pin is to disconnect the nose gear from the steering mechanism so it can turn freely when the aircraft is towed. The pin is secured to the airframe by a steel lanyard. It is usually disconnected while the aircraft is parked, both at its home base and at intermediate stops, in case the ground crew needs to move the aircraft.

In my case, the pin was not reinstalled before we taxied out. Yes, it was embarrassing to have to stop the plane and send my FO out (with the engines running) to reconnect the upper and lower torque links on the nosegear, but we did it. What choice did we have – I had no steering control.

I just read about an accident from 2018 with a different outcome. The pilot in command recalled the steering seemed sluggish on the short taxi to the runway, but he thought it was because of their gross weight taxi (they were loaded for a transatlantic flight). Apparently, some aircraft have limited steering with the torque links disconnected, so the PIC elected to continue to the runway, not thinking that he was missing the steering pin.

They began the takeoff roll, assuming that the steering would improve, but it did not. In fact, the Captain aborted the takeoff at around 70 knots due to a severe vibration, which caused the nosewheel to turn sideways during the deceleration. From that point, the nosewheel tires shredded, causing extensive damage to the nosegear assembly and to the fuselage nose structure.

The torque link release pin was found on the runway during the investigation, with the upper end of the broken lanyard still attached to the pin.

They sure had a different ending than my simple loss of pride. All 4 of us, my FO and me, and the crew on the accident aircraft, all believed that we had checked the pin during preflight. All 4 of us learned about the torque link during our pilot training. And all 4 of us taxied out without the pin installed. I’m pretty sure I won’t ever do that again – I’m going to include the pin in my pre-departure readiness briefing before the cabin door is closed, maybe you should too.