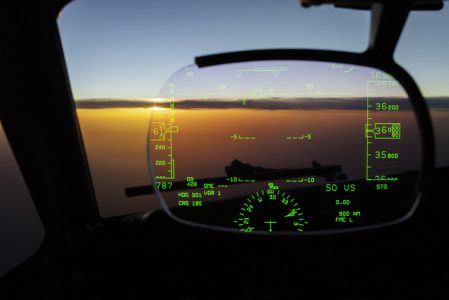 I saw a car commercial the other day that described the safety benefits of its Head-up Display (HUD) technology and I remember thinking it must be nice to be able to afford a Jaguar or high-end Mercedes – turns out it was a Ford Escape! HUD technology is becoming relatively common and that’s good news for aviation, aircraft performance, and ILS approach. StandardAero and Thales are partnering to certify the TopMax wearable HUD for business aircraft, which will enable manual “eyes-out” CAT II landing and ILS Approach CAT I special authorization.

According to AINonline, several supplemental type certificates are underway, with installation downtime at a minimum because most of the hardware is primarily worn by the pilot. The TopMax HUD determines its location and where the pilot is looking by sensing the location of small reflective stickers mounted above the pilot.

There are numerous benefits of the wearable HUD:

With the wearable HUD, the pilot is not forced to look straight ahead through a fixed glass. The TopMax’s is worn by the pilot, who can then look in any direction and virtually “see” symbols wherever he or she is looking. It also offers full color and can display off-axis symbols such as crosswind, synthetic runway, extended centerlines, 3D traffic, 3D waypoints, and flight path director.

For departures, the HUD can be used for low visibility takeoffs and enhanced flight vision system capabilities. Regardless of how the HUD system works, either fixed or wearable, the safety benefits are well documented. A HUD gives pilots access to critical flight information, while also allowing them to focus their attention outside the aircraft, looking for potential conflicts or threats to the safety of the flight.

There is no question that the growing prevalence of HUDs are the way of the future. Wearable HUDs will allow the technology to be installed in many more aircraft types, including those that are too small for a traditional HUD. Pilot training will soon incorporate HUD instruction, making the skies safer for everyone. Anything that allows a pilot to look outside while on an ILS approach is going to increase situational awareness and safety.