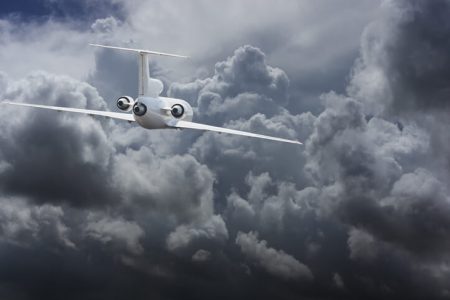 Aviation weather is the cause of another aviation accident

I recently spent time flying with a pilot who does not seem to have a healthy respect for aviation weather, and his attitude is starting to bother me. I’m trying to decide if I am being ultra-cautious or if he is being ultra-reckless. I also wonder if he knows things that I don’t about aviation weather (I don’t think that he does).

He and I seem to disagree on thunderstorm avoidance, which makes summertime trips difficult. He’ll blast through yellow and red on his iPad radar like it’s not even there. He reasons that the weather is probably below us. Maybe it is, but then again, maybe it isn’t. We typically fly at FL410, so it’s easy to see where the weather is up there, and most of the time, he’s right; it’s usually below us. For me, if we’re still in the clouds at 41,000 feet, I want to pay attention to what’s brewing below us.

Case in point, I just read the final accident report of a Challenger that smacked into a thunderstorm at FL410, ending in a total loss of aircraft and life. I can’t imagine a more terrifying scenario than what they went through in their final moments.

According to the report, severe turbulence at 41,000 feet caused the crew to lose control and crash 40,000 feet below in the desert. So I wonder what they were looking at when they decided to proceed into the outer wall of the storm.

Could they have been looking at their iPad without seeing the bright red indicators of the deadly cell? Certainly, they could see the clouds reaching up through their altitude, which is suspect enough above 40,000 feet. Anytime I see clouds up there, my radar is on. Is it possible they flew into the storm completely blind?

The crew requested a climb three times to get on top of the storm, but none of the altitude changes were successful. Then, when they reached the storm’s core, all hell broke loose. Their flight data recorder tracked rapidly increasing turbulence and bank angles of more than 18 degrees in both directions. Next, they experienced a downward acceleration of almost 2Gs followed instantly by an upward acceleration over 2 Gs. The NTSB report says that a “massive disturbance in the air mass” caused the gyrations.

Honestly, I didn’t know that a “massive disturbance in an air mass” was until I read this. Now that I know, I don’t ever want to be in a situation where I might encounter it. The G forces increased to almost +3 and the aircraft rolled 90 degrees to the right while climbing, uncommanded, to FL448. From here, they went inverted with a 60-degree bank nose down and ultimately entered an inverted flat spin that was unrecoverable. Additionally, both engines flamed out during the initial upset.

I’m sure bells and whistles sounded and every kind of warning light flashed inside the cockpit while the pilots desperately tried to regain control of the aircraft. It’s one of the most disturbing scenarios I can imagine in an airplane.

Now, back to future flights with my braver-than-brave pilot co-captain. We ARE going to go around the reds and oranges. I will NOT take no for an answer. Aviation weather is no joke, and the word “probably” isn’t going to cut it for me anymore. So we will use the iPad weather, cross-check it with the aircraft radar, and take the most conservative path forward. Avoid, avoid, avoid has more meaning for me than ever before.