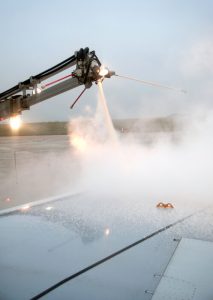 Aviation weather is not to be messed with

I’m amazed when a pilot disregards the dangers of winter aviation weather and takes off with a noticeable coating of ice and snow on the aircraft. Were they sleeping during their initial aerodynamics pilot training course? Not taking off with a contaminated wing is about as basic as it gets, yet I keep reading about accidents caused by it. What’s worse are the accidents with multiple factors that show a complete disregard for the regulations and laws of physics.

12 passengers (all family members) on a Pilatus PC-12 with 10 seats, covered in ice that takes off during a snowstorm, is the perfect example of a flight gone wrong, and for no reason other than a careless pilot. This single-engine turboprop crashed less than two minutes after taking off. Let’s look at the decisions made by the pilot:

Additionally, the pilot knew that the ice on the wings was terrible. That’s why he and a passenger spent 3 hours removing ice and snow from the aircraft while the rest of the passengers went hunting. It was also snowing while they worked, and the weather worsened.

On the ground, the lodge manager where the group had stayed the night tried to persuade the pilot to wait until the next day to leave. The pilot, however, said they needed to get home. He also said that the plane was “98% good” and that “the remaining ice would come off during takeoff.”

Talk about an accident chain. Winter aviation weather is not to be trifled with. The FAA has a zero-tolerance for the clean wing concept for a reason. Clean is clean, from soft, fluffy powder to hard, crusty ice. Cancel the flight if you can’t find a taller ladder. Some tragedies are entirely avoidable, and this accident was one of them.