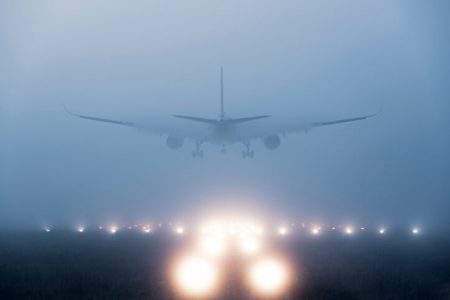 One of my favorite things to do as an airline pilot was to autoland the Airbus. It never ceased to amaze me that we were moving along at 120 knots, a mere 100 feet above the ground, and we couldn’t even see the glow of the approach lights. Boy, if that doesn’t get the adrenalin flowing, I don’t know what will! But there’s a new technology that’s about to make low visibility approaches a little less thrilling. It looks like the only aviation weather events we’re going to have to worry about in the future are thunderstorms and icing.

Vu Systems has a new sensor that promises to revolutionize the way we land in low visibility conditions. It’s called a passive millimeter-wave (PMMW) sensor and it allows pilots to see through rain, heavy fog, and extremely low ceilings. The sensor is known as the Vu Cube and it is in the process of final certification.

It actually sounds like a fascinating idea. The company, based in Morrisville, North Carolina, tested the sensor in a wide variety of low visibility conditions and it surpassed all of their expectations. The runways were clearly visible on approaches in dense fog and the Vu Cube even worked in conditions where visibility through the IR sensor was completely obscured.

And here’s the really great part…it has the capability to display the runway 2 -3 miles out under very low visibility conditions. How’s that for situational awareness? The magic is in the technology that operates at a wavelength that is up to one thousand times longer than current advanced sensors. This allows the Vu Cube to see where traditional infrared sensors cannot.

It even allows pilots to taxi in zero visibility conditions!

Vu recently announced a partnership with Saab to incorporate their sensor into a next-generation enhanced flight vision system, combining PMMW and infrared sensors with a synthetic vision system. What a great time to be a pilot – I can’t wait to see how this turns out! I hope that the technology is available to a wide variety of aircraft in the very near future.

The truth is, it won’t be long before drones are even more prevalent, so we need all the technological advances we can get to stay in the game. Aviation weather will always be a factor for pilots, but with new products like this we can see through the dense fog and safely deliver our passengers and/or cargo to their destinations.