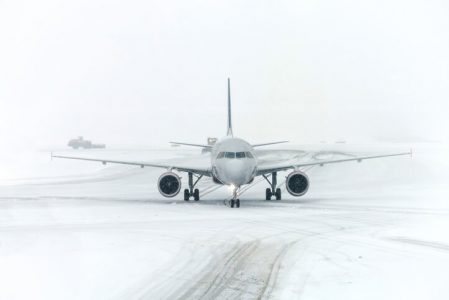 Lights! Camera! And if the lights are right, the only action is a successful takeoff when weather is not ideal

I still remember getting the phone call late one winter night many years ago. My roommate and I were relatively new first officers at USAir (that’s how long ago that was) and she was finishing up her DC-9 trip with a landing in Pittsburgh. The aviation weather was typical for a winter night….snowy and windy, with low visibility and an accumulation of snow on the runways and taxiways.

You know where this is going, right? Yeah, the Captain was making a right turn as he exited the runway and sure enough, the right main gear sunk into the snow-covered ground as they left the pavement. Of course, it wasn’t her fault, but she was difficult to console. It was a pretty big deal, as you can imagine…having to offload the passengers and get the aircraft towed back to maintenance.

One problem that night, in addition to the steady accumulation of snow, was the vagueness of the taxi lights. My roommate was looking out the window as they turned, but couldn’t get a good idea of the taxiway’s exact edge.

A Colorado-based company had an idea of making LED taxiway boundary lights more distinguishable and easier to follow, especially on dark, snowy nights. Instead of the traditional “single point” light stanchion with the simple glass cover on top, Luminaerospace developed a design that incorporates two acrylic rods extending from each side of the central light.

When traditional taxi lights are “visually” strung together on a low visibility night, they can appear like a sea of light. However, with the new design pilots have more of a “line segment” to look at, instead of just a dot. It will give us an additional visual cue to the taxiway edge lights because of the light’s shape, rather than only a single light source.

The FAA has approved the use of the new design and the company is now working with runway light manufacturers to produce form-fit cover replacements to use all over the world. The units currently sell for $33 each, but the production costs will soon be coming down which will trigger lower retail prices soon.

And just to make sure that the new design works in even the roughest aviation weather, the lights have been tested at airports worldwide, including Telluride Regional. Even with 200 inches of snow and automatic snow removal, the lights kept on doing their job. If it keeps more of us on the taxiway and out of the mud, then I say bring em on!