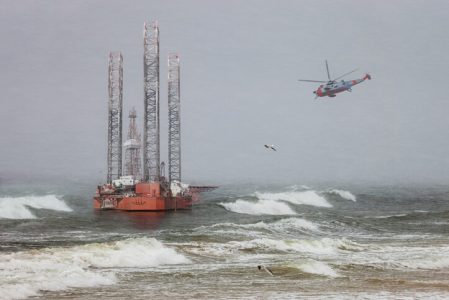 Aviation weather leads to a lawsuit

A flight operated by Canadian Helicopters (CHO) in 2019 led to a lawsuit from the passengers. The official charge of the lawsuit was that bad weather led to multiple missed approaches to a Canadian oil rig, causing mental distress and even post-traumatic stress disorder. There were no injuries reported, and the helicopter flew back to its base after the incident; the passengers, however, were understandably terrified.

The incident was in a Sikorsky S-92A flying a 155 NM trip to the Thebaud Central Facility (TCF) south of Nova Scotia with 11 passengers and two crew members onboard. The weather at the destination rig was not ideal, with observer reports indicating a 300 foot broken ceiling with 5/8 mile visibility. The pilots aborted the first two approaches because of limited visibility and lack of visual references. That sounds like good crew resource management and critical thinking to me – we all know that things can go wrong fast when flying low over the water without visual references. So far, so good.

On the third approach, the helicopter became unstabilized in its speed, pitch, and bank. The helicopter then entered a vortex ring state with a resultant spin through 845 degrees of rotation.

The Transportation Safety Board (TSB) said the cause was that the pilot flying pressed and held the cyclic trim release, degrading the performance of the automatic flight control system. This increased the pilot workload while attempting to fly a visual approach without visual references and played a part in the control difficulties that led to the unstable approach.

The helicopter was in a steep descent with a rate of 800 fpm, while at a very low airspeed with power being applied. All this was happening BELOW 250 feet radar altitude. When the pilot flying increased the collective, their rate of descent instantly increased to 1800 fpm. The subsequent increase in power in this condition led to the vortex ring state.

They did recover, and again there were no physical injuries, but the recovery took place a mere 13 feet above the waterline, far below the helideck’s altitude of 174 ft. Rapid flight control inputs resulted in multiple torques and engine exceedances of up to 146%. The helicopter was taken out of service when it returned to base and CHO ceased operations at the end of 2019.

I certainly hope this doesn’t set a precedent for lawsuits based on frightened passengers, but there are many lessons one could learn from this flight.