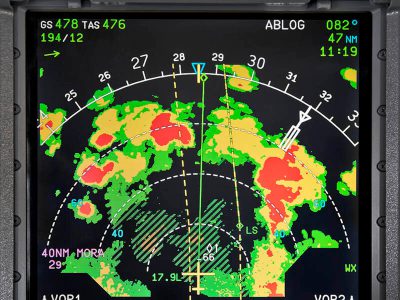 With the recent outbreak of severe weather in the Central United States, this is probably  a good time to talk about aviation weather radar. The advancement in radar technology has been amazing in recent years, but on the flip side, it’s getting harder to keep up with all the changes. In this 4 part series on weather radar, we’re going to talk about some radar basics as a review and then discuss some of the newer options to keep you as safe as possible during the upcoming convective season.

The 1977 crash of Southern Airways Flight 242 was the first weather related accident that I remember as a new pilot and it still fills my heart with dread to this day. If you are not familiar with the accident, here is a brief synopsis:

Obviously, radar in 1977 was nothing like what we have today, but the crew did have onboard radar in their DC-9 as they departed Huntsville, Alabama. Very soon after takeoff, they inadvertently entered a heavy thunderstorm and both pilots attempted to use their weather radar to find an escape path. They saw a black area on their radar and since the rest of their screen was filled with dark green (there was no color back then) they inaccurately thought that the black area was clear air.

It was actually the strongest part of the storm. What the pilots did not know was that the heavy rain caused the radar to incorrectly portray an area of intense rain, turbulence and hail as an area of light precipitation. Both engines flamed out because of the water ingestion/hail damage and even though the crew tried to land on a road, they clipped a gas station and burst into flames.

That accident was my first introduction to attenuation, and while we have many new tools available in modern aviation to avoid a similar fate, it is worth talking about as a review of what not to do.

Radar attenuation is simply the absorption or reflection of radar signals as the radar pulse penetrates an area of precipitation, preventing that radar from detecting any additional cells that lie behind the first storm. A signal that is fully attenuated is fully absorbed, with no pulses being returned to the radar to be “painted” on the screen. An area of attenuation appears “blank” on the radar, which is why the Southern Airways crew thought they were flying towards improving weather. In reality, they were heading straight for the worst of it.

Here’s a tip for avoiding shadows: To accurately interpret your radar returns, aim the tilt on your radar down far enough to paint the ground, then look for returns. If you see a potential shadow (a dark, blank area), look for a cell in front of the shadow. If you see a storm before the shadow, avoid it like the plague. If you don’t see any storm cells in front of the dark area, it’s probably not a shadow, but may be a large lake or a tall mountain (equally disturbing, depending on your altitude).

In Part II of our series on Aviation Weather Radar, we’re going to discuss the distinction between base and composite reflectivity. Please join us!