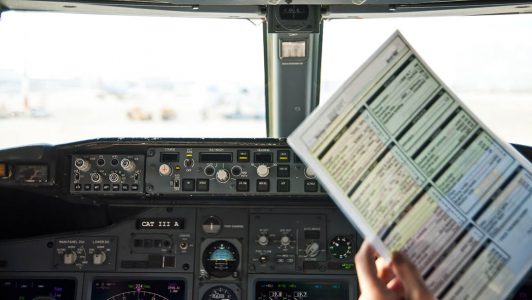 I always get a pang in my gut when I hear about an aviation accident. I want to know what happened, what kind of aircraft was involved, the background of the crew…. I guess I’m looking for reassurance that this won’t happen to me, that I would recognize the “accident chain” before it was too late.

The pang usually goes away when I’ve analyzed the details enough to convince myself that I might have caught the deadly link. But something about the Falcon 50 accident in Greenville, South Carolina (KGMU) last month grabbed me and wouldn’t let me go. I’m sure you’ve heard the details, but just to recap the highlights, the Falcon impacted a ditch at the end of the runway when the pilots were unable to stop. Oh, and neither pilot was rated in the aircraft.

Now normally I would stop right there. I would shake my head with the rest of you, wondering if the critically injured passengers in the back were privy to that knowledge before the cabin door was closed. And I’d wonder if a fully qualified crew would have avoided this accident altogether. But I’d also wonder what went wrong at the most critical time of the landing and what split second decisions and actions would have been required of the crew, regardless of their experience level.

The Best Time To Discuss An Emergency Is BEFORE The Emergency

It looks like there was an issue with the brakes during the landing, maybe even a complete brake failure. But simply labeling this accident as a rookie mistake might be cheating the rest of us out of a valuable lesson.

Activating an emergency brake system is not always automatic. Some procedures involve pulling levers, rotating switches or turning handles. Regardless of the method used in the plane you fly, one thing is for sure. If you have to recall the procedure, find the switch and factor in human reaction/processing time, 5300’ of runway could easily come and go, especially if you’re 10 months out of training and complacent because you do the same thing, day in and day out. Yes, even if you’re fully qualified.

So let me ask you something…. When you get to the part of the checklist that says “Crew Briefing”, what is your response? Do you say “Standard” or “Complete”? Or do you actually take a moment to think about what you would do if the brakes failed? Or if the auto feather system didn’t work? Or if you had to make an emergency return to the field in low IFR conditions?

If the Greenville scenario happened to you, how fast could you mentally power up from a routine, everyday landing to a full-blown, life or death emergency? Wouldn’t it help if you had just reviewed the procedure for full brake failure in your crew briefing? The same is true for briefing the missed approach, the V1 cut, the passenger evacuation or anything else that you had trouble remembering in training. Even if you just point out the highlights. At least talk about it. Condense it. Remind each other of the details for procedures that you may only see once a year in the simulator. And if you fly single pilot, remind yourself!

The crew briefing exists to offer you one last chance to review and prepare for the unthinkable. What would your response be if your life depended on it? Because it does.