Does your Aviation Weather Briefing Include Smoke and Ash? 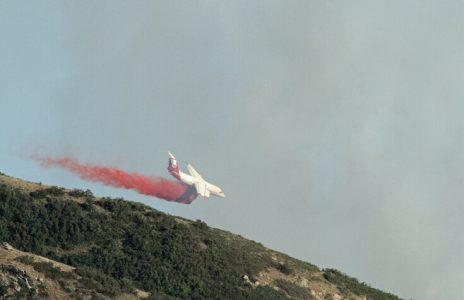 Flying over or through the smoke and ash of a major wildfire is something that you won’t soon forget. Unfortunately, wildfire seasons are lengthening all over the world and are becoming a challenge to pilots who now need to include smoke and ash in their aviation weather briefings and preflight planning.

Wildfires have always been nature’s way of keeping forests and vegetation under control, but recent changes have increased the severity of these fires to disturbing levels. Longer droughts and stronger windstorms may or may not be the result of climate change, but there can be no doubt that wildfires are becoming a year-round menace and that is not good for aviation.

The atmospheric conditions that produce wildfires keep most of the smoke and ash from rising into the free atmosphere, reducing visibility near the surface. Sometimes the heat of the fires can destabilize the lower level of the atmosphere and even generate convection. The lack of humidity, however, restricts the cloud material to smoke, rather than the traditional water vapor and the rising ash and aerosols frequently carry a charge that can create lightning without rain, leading to the ignition of additional fires nearby.

When you add the commonly seen high surface winds to the smoke and ash, you now have the challenge of decreasing visibility and increasing thermal turbulence. Moderate turbulence in the lower levels is a common occurence near wildfires and should be expected. In fact, the burning surface can maintain a strong convective cycle, drawing in cool air from its surroundings and quickly heating it so it can rise. Strong winds above the surface layer can then strengthen the turbulent eddies as they intercept the rising air.

As with smog and fog, the smoke layer may be relatively thin and even transparent when viewed from above. But because it is concentrated near the ground, it can severely reduce horizontal visibility and pilots must be aware of what to expect as they descend toward minimums. The smoke particles are also able to scatter light, resulting in a deterioration of depth perception. Even if you can see the runway at altitude, prepare for your slant range visibility to deteriorate as you descend.

There are additional hazards to consider when operating in the vicinity of a wildfire that may not be obvious to all pilots. In an active fire zone, there are often aerial firefighting operations underway, and even though these pilots may be in communication with ATC, they may not be making position calls over nearby uncontrolled airports. They also might be flying erratic patterns at low altitudes and are undoubtedly concentrating on their task at hand, not thinking about other traffic in the area.

Pilots should also consider the possible need for masks or respirators when you are operating at airports near a fire zone. Have the masks on before you open the cabin door, especially if you will be spending a significant amount of time outside the aircraft. Once the smoke has cleared or you leave the area, wash your aircraft to get rid of any residual ash and also change your cabin air filters since they will likely be clogged with smoke particles. You may even need a thorough aircraft interior cleaning to get rid of the smell of the smoke.

In the United States, a good source for active fire information is the National Interagency Fire Center (www.nifc.gov). In Canada, it’s the Canadian Wildland Fire Information System (cwfis.cfs.nrcan.gc.ca). Using these resources’ information and maps showing wind direction, you will be able to estimate what airports might be affected by smoke plumes. As always, a thorough aviation weather briefing is important, especially when operating near wildfires. Be smart and stay safe.