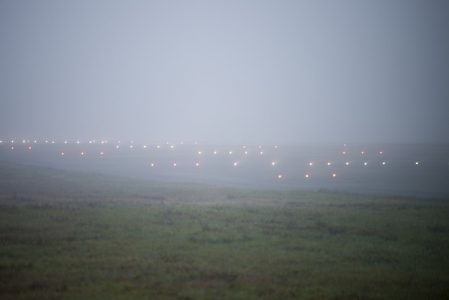 It was a dark and snowy night… Our non -tower destination would require an approach through a mountain pass, with an equally precise missed approach back out through the mountains, if necessary. With 2 hours of flying still to go, our 4:00 AM wakeup call was starting to catch up to us as we watched the weather at our destination deteriorate at 7:00 PM. Knowing that our mountain landing would be tricky even with a good night’s rest, we spent most of the flight discussing the approach, keeping a watchful eye on our fuel and the weather.

Since the weather was still marginal VFR when we began our descent into the dark clouds, our emphasis was definitely on the “approach” side of things, with a quick briefing of the missed approach instructions. I briefed the heading, altitude and holding pattern entry for the miss, but that was the extent of it. Oh, and we DID discuss making a beeline to our alternate if a going missed became necessary, but neither one of us actually thought that would happen.

The descent was relatively uneventful, except for light icing as we entered the clouds. A periodic check of the ASOS, however, indicated that snow was moving in. The visibility went from 10 to 7 to 3, just since we had begun our initial descent. No problem…we would be there soon. We were cleared for the procedure turn and begin the approach, but that’s when we went from “no problem” to “problem”.

The autopilot had a mind of its own and twice began an unauthorized “dive” (yes dive in the mountain pass) and I had no choice but to disengage and hand fly the rest of the way. The approach suddenly became very busy, with multiple step downs and preselecting altitudes and cross checks. Strike one.

We had the ASOS on the #2 radio and as we began the final segment, the snow became heavy enough to limit the visibility to 1 mile. We began to consider the possibility that the runway would now be slick with an unknown braking action. Another issue to distract us. Strike two.

As we approached the landing minimums to our slightly offset approach, we both started to think that the runway lights had not been activated, even though we had keyed the mike several times. It was just too dark outside! But then, in a blur that we caught out the right window, the faint sight of runway lights, as they flew past us at 140 knots. Strike three. We’re out.

Missed Approach! Takeoff Power. Positive Rate Gear Up. Wait…What was that heading?? What was that altitude? We had briefed the miss but neither one of us could remember it! It simply took a back seat to all the distractions happening during the approach. I’m not proud of this, but it did teach us a valuable lesson.

Our night ended with a safe arrival to our preselected alternate. Our earlier decision to not mess around with a second landing attempt served us well, since we landed with only the legal amount of fuel onboard. We were lucky. Others have not been. Be prepared!!