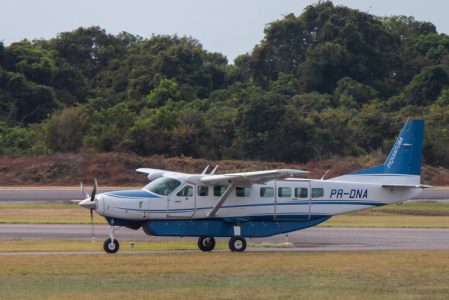 Electric airplanes could be filling up airspace soon, we can also expect changes to how we file a flight plan

The Grand Caravan has an electric engine now! A prototype 208B just made a historic 30 minute flight and the all-electric propulsion system flawlessly supported basic maneuvers. I can’t wait until electric airplanes are the new normal and “fuel on board” is a thing of the past for a flight plan. Instead, “charge time” may be how future pilots calculate distance. It’s fascinating and just a little scary at the same time.

I’ve had a Chevy Volt for years now; I always appreciate the noise it makes whenever the electric charge runs out and the little gas engine automatically comes to life. I have been hesitant to take the plunge and go all-electric, mostly because I don’t want to be stranded on the side of the road. Now I wonder if I’ll have to worry about becoming a glider at 20,000 feet if I misjudge my battery life!

Magnix and its partner, Aerotec, are developing the electronic turboprop under the name eCaravan and are hoping to achieve certification by the end of 2021. I’m sure they are addressing my concerns! The Grand Caravan prototype is powered by a Magnix 750hp Magni500 all-electric propulsion system, replacing the 867-shp Pratt & Whitney PT6A turboprop in “regular” Caravans. The test plane was the largest aircraft to have flown with the all-electric propulsion system.

The system currently draws power from a set of 750-volt lithium-ion batteries that need approximately 30 minutes of charging after a 30 minute flight. Magnix and Aerotec estimate that current battery technology would allow the aircraft to carry 9 passengers 100 miles. They are also considering using lithium-sulfur batteries or hydrogen fuel cells as alternatives to support longer operations.

Electric aircraft will eventually be able to operate at a fraction of the cost of Jet A powered airplanes with the extra bonus of zero emissions and the need for much smaller airports.

However, the leap to electric power is not without its challenges. Magnix is a sister company to Eviation, the company developing the Alice fixed wing electric aircraft, which is on a production delay following fire damage to a test aircraft in January. But there is still progress – I’ve been reading about several electric aircraft in development, so I’m sure it won’t be long before they start showing up at airports around the world. Time to make room for another box on the flight plan form!