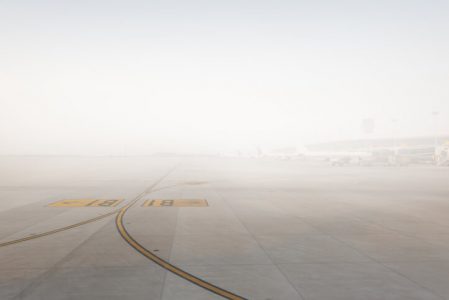 Pilots operating under Part 91 rules may legally take off with no forward visibility. Anyone with the proper qualifications and ratings can blast off in dense fog, low clouds or heavy rain. It’s legal, but not smart. Part 91 takeoff minimums govern pilots of all experience levels, so it’s up to the pilot to make smart decisions. On the morning of December 24, 2017, the pilot of a Cessna 340 made the worst decision of his life.

The AWOS that morning was reporting visibility less than ¼ mile in dense fog with a 300 foot overcast. The 70 year old private pilot had an instrument rating, but nobody knows if he was instrument current. He did file an IFR flight plan, but there was no evidence that he officially checked the weather.

The plan was to fly his family from central Florida to the Keys for breakfast. When the 4 family members arrived, they talked extensively about the fog. In fact, the pilot actually kept the plane in the hangar and loaded his passengers inside because the visibility was so poor.

To make matters worse, he also believed that the visibility was too poor for him to taxi from his hangar to the runway, so he requested a tow to the ramp. He was afraid that he would wander off the relatively narrow taxiway and hit something.

The FBO employees watched the Cessna taxi slowly toward the runway until it disappeared into the fog. They heard the engines develop maximum power but seconds later, there was a loud explosion. The accident site was located on aircraft property about 200 yards from the runway. There were no survivors.

Why would the FAA call that a legal takeoff? My best guess is that there are hundreds of 20,000 hour airline pilots who fly Part 91 for fun and would have no issues at all with a zero zero takeoff. But we all have to know our limits. Unfortunately, the accident pilot actually had a reputation for questionable decisions.

On one flight, he experienced an engine failure and opted to continue to his destination instead of landing at the nearest suitable airport because the logistics of diverting were too difficult. Another time he was scheduled to fly with a friend on a foggy morning and when the friend questioned the safety of the flight, the pilot insisted that a departure would be perfectly legal. Others said that he was not a safe pilot because he took too many risks.

In the end, spatial disorientation was listed as the official cause of the accident. It must have happened instantly on takeoff. The pilot thought he had everything under control.

Don’t be this guy. Know your limits. Be smart. 5 people died because Part 91 Takeoff Minimums tricked this pilot into believing that if the takeoff was legal, then he was good to go. He wasn’t.