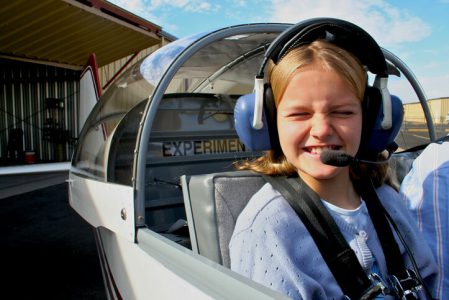 Girls in Aviation Day was virtual this year, but the message of introducing more young women to pilot training is still strong

Women in Aviation International (WAI) is about to celebrate the 6th annual Girls in Aviation Day (GIAD) by launching a brand new mobile app. The “Aviation for Girls” App is designed for girls ages 8-17 and is sponsored by the U.S. Air Force. The app is available to youth interested in aviation/aerospace and STEM and will deliver valuable content and resources, including career tracks, career videos, virtual tours, scholarship information, hands on activities, and digital issues of the “Aviation for Girls” magazine.

I would have loved to have access to something like this when I began my aviation training over 40 years ago. I was a 12 year old girl and my first flight instructor was a female pilot who was also a sky writer for Pepsi! To say we were the minority at that flight school (or at any flight school, for that matter) is a huge understatement. But having a female mentor was probably what kept me going forward in such a male dominated field.

Now, 15,000 hours later, I realize the importance of female encouragement and mentorship, and it looks like the U.S. Air Force agrees. Lt.Col. Annie Driscoll understands the importance of inspiring girls at a young age. She says that “women are underrepresented in the rated careers in the Air Force, and in aviation in general, and with our partnership with Women in Aviation International, we hope to change that.” I hope they do too!