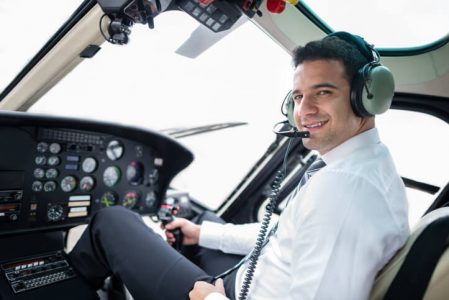 I remember being surprised in pilot training several years ago when we practiced the jammed aileron procedure in the sim. The checklist called for “breaking” the interconnect between the left and right yoke and it sure was an eye-opener! The Captain and First Officer each took their yoke and forcefully snapped it toward the center of the airplane, causing one to break and lose control while the other remained connected to the ailerons.

It was fun in the simulator, taking bets on who would emerge as the winner with ultimate control of the airplane. The loser would sit there and move the floppy, useless yoke back and forth, feeling like, well, a loser. But there was a little voice deep inside my head that acknowledged that if this happened for real at 41,000 feet, it might not seem like a game anymore. It might be downright terrifying.

A pilot of a nearly new 505 Jet Ranger X had an experience that would have caused even more anxiety, and fortunately for him, he was still on the ground. He was doing the preflight control check when the collective handle broke off in his hands.

Talk about an eye-opener! And apparently, it wasn’t the first time this happened on a 505 Jet Ranger X. In February, a police department in California had the collective handle break just above the floor on a 2019 model. Bell issued an Alert Service Bulletin and Transport Canada ordered an AD requiring one-time inspections, but more action was necessary. After the preflight incident, Transport Canada imposed its second emergency AD in 2 weeks for Bell’s newest helicopter. They then discovered that the broken handle and cracks found in another collective resulted from metal fatigue.

All this led Bell to issue another Bulletin that requires a fluorescent penetrant inspection every 25 hours and banned flying from the right seat until those inspections are complete. Good call.

Bell and the supplier of the collective handle are working on a fix for the problem and the new parts should be available soon. In the interim, they will provide replacement assemblies for those in direst need and, of course, all costs will be covered by the warranty.

I guess there are certain scenarios that pilot training can’t prepare you for. Bell and these “incident” pilots were very fortunate that nothing catastrophic happened and that steps are now in place to prevent anything from happening in the future. It does, however, make me wonder about metal fatigue in an almost new helicopter, but I will leave that to the experts. For now, I’m grateful that a solution is on its way, and I can go back to trying to outmuscle my fellow aviators in the safety of the sim.