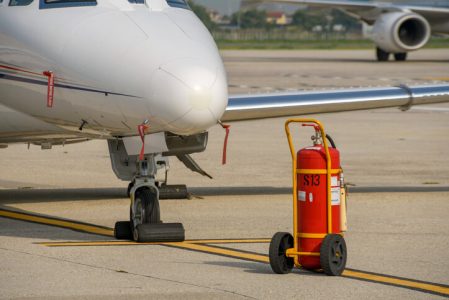 Nothing brings terror to a pilot quite like the thought of an in-flight fire. Even a fire while still on the ground is the stuff of which nightmares are made. Pilot training does its best to prepare us for the worst of the worst, but simulators have their limitations. We know deep down inside that we are safe, pretending that we are in mortal danger.

Engine fires are one of the emergencies that we train for the most, and understandably so. But, really, how hard is it? You pull the lever with the flashing red light, fire the bottle, count to 5 and do it again. You then ask for the checklist and land the airplane.

Can we talk about electrical fires? Imagine smelling that electrical burning while at 35,000 feet. That’s about as bad as it gets; it sends shivers down my spine just thinking about it. Don’t even get me started on thermal runways. So what’s the deal with these new electric aircraft that will be the way of the future?

Fortunately, companies like Safran Electrical & Power and Pyroalliance are working together to develop a system that will mitigate the risk of fires in electric propulsion aircraft. They intend to build technology that could react in a millisecond to protect against the threat of an electric arc on electric and hybrid-electric aircraft. A MILLISECOND!

They have named it the pyrotechnic electrical shutdown system, and they hope to have a prototype ready to show the world by 2022 and the system ready for commercial use by 2023. Safran has developed the Engineus range of electric motors, which several electric aircraft manufacturers have already selected for use.

Safran’s expertise lies in working with high-power aeronautical electrical networks with voltages as high as 1200 volts. Because of this, they have been able to create high-voltage circuit breakers that provide instantaneous protection from electrical arcs. The technology is needed since at least two electric aircraft prototypes have already been damaged in fires that broke out while on the ground.

Pilot training will never duplicate the fear of a real-life electrical fire but, hopefully, this technology, and more like it, will prevent the fire from starting in the first place. I hope that all aircraft will be safer in the future, as technology improves every part of aviation!